The Philippines: Right of Future Generations to a Healthy Environment

The Philippines: Right of Future Generations to a Healthy Environment

Constitution of the Republic of The Philippines, 1987 [English]:

Section 15, Article II: The State shall protect and promote the health of the people and instill health consciousness among them.

Section 16, Article II: The State shall protect and advance the right of the people to a balanced and healthful ecology in accord with the rhythm and harmony of nature.

The State shall ensure, for the benefit of the Filipino people, the full exploration and development as well as the judicious disposition, utilization, management, renewal and conservation of the country’s forest, mineral, land, waters, fisheries, wildlife, off-shore areas and other natural resources, consistent with the necessity of maintaining a sound ecological balance and protecting and enhancing the quality of the environment and the objective of making the exploration, development and utilization of such natural resources equitably accessible to the different segments of the present as well as future generations.

Selection as a Future-Just Policy
In July 1993 the Supreme Court of the Philippines ruled in favour of a group of children, acting on their own behalf as well as that of future generations, and supported by the environment NGO ‘Philippines Ecological Network.’ They had asked the Government to cancel timber licences on the grounds of a violation to their constitutional rights to a healthy environment but found themselves appealing to the Supreme Court on a question of legal standing:

“Petitioners minors assert that they represent their generation as well as generations yet unborn. We find no difficulty in ruling that they can, for themselves, for others of their generation and for succeeding generations, file a class suit. Their personality to sue in behalf of succeeding generations can only be based on the concept of intergenerational responsibility insofar as the right to a balanced and healthful ecology is concerned. Such a right, as hereinafter expounded, considers the ‘rhythm and harmony of nature.’ Nature means the created world in its entirety. Such rhythm and harmony indispensably include, inter alia, the judicious disposition, utilization, management, renewal and conservation of the country’s forest, mineral, land, waters, fisheries, wildlife, off-shore areas and other natural resources to the end that their exploration, development and utilization be equitably accessible to the present as well as future generations. Needless to say, every generation has a responsibility to the next to preserve that rhythm and harmony for the full enjoyment of a balanced and healthful ecology.”

Prior to the Supreme Court ruling, the Government had already issued an order prohibiting new logging in the remaining virgin forest. When the case was returned to the lower courts it was not pursued any further. It is highlighted here for its recognition of “generations yet unborn” as legal persons and as a best practice in terms of “intergenerational responsibility.”

From the 1965 to 1986, the Philippines lived under the regime of Ferdinand Marcos. In February 1986, after bold election irregularities, a revolution broke out, leading to the escape of Marcos from the country and the proclamation of Corazon Aquino as the new President of the Republic.

The 1987 constitution is particularly innovative with regards to its consideration of sustainable development principles. In its ruling, the Supreme Court quotes the Constituent Commission which had stated in its debates that the right to a healthy environment “implies, among many other things, the judicious management and conservation of the country’s forests. Without such forests, the ecological or environmental balance would be irreversibly disrupted.”

The plaintiffs to the case put forward evidence explaining how just 25 years before, the Philippines possessed 16 million hectares of rainforests (53% of its land mass). At the fall of the regime, these same rainforests had fallen to just 1.2 million hectares, a mere 4% of land mass – highly unsustainable for a tropical environment and harmful to future generations. In 1989, Government data revealed TLA’s for 92 logging corporations for an area covering 3.9 million hectares. Continuing at this rate of deforestation, it was doubted whether any rainforest would remain at all by the end of the ensuing decade.

In 1990, civil case n.90-777 was initiated at the Regional Trial Court of Makati, Metro Manila. A class action was filed against the Secretary of the Department of Environment and Natural Resources (DENR) demanding the cancellation of all existing timber license agreements in the country and the end to receiving, accepting, processing, renewing or approving new timber license agreements.

In 1991, the case was rejected by the Regional Trial Court for a lack of juridical personality. It was determined to be of a political nature, unsuitable for the courts to decide upon. On appeal, the case then passed to the Supreme Court which ruled in favour of the plaintiffs and their locus standi, i.e. their right of action.

Claiming that today’s children, and future generations, may never see, use, benefit from or enjoy the “rare and unique natural resource treasure,” the plaintiffs demanded:

“(1) Cancel all existing timber license agreements in the country;

The plaintiffs asserted that the unsustainable deforestation in the Philippines was a violation of their constitutional right to a healthy environment. Ultimately however, the Supreme Court appeal does not focus on this point, rather the question of the legal standing of future generations and whether it is possible to bring a case on their behalf.

Methods of Implementation
On the 30 July 1993, the Supreme Court of the Philippines ruled as follows:

WHEREFORE, being impressed with merit, the instant Petition is hereby GRANTED, and the challenged Order of respondent Judge of 18 July 1991 dismissing Civil Case No. 90-777 is hereby set aside. The petitioners may therefore amend their complaint to implead as defendants the holders or grantees of the questioned timber license agreements.

The Manila Regional Court had been overruled in its rejection of the case as political and without legal standing. The appeal had succeeded – “generations yet unborn” could be represented within the legal system and the case, in so far as its demands relating to TLA’s, was returned to the lower courts. For lack of resources and an administrative ruling of the Government prohibiting new logging in remaining virgin rainforest, it was not pursued further.

The Philippines has a hybrid legal system with elements of both civil and common law. The ruling by the Supreme Court on the legal standing of future generations acts as a precedent to be followed by all other courts in the Philippine legal system.

Prior to the Supreme Court ruling, the Government of the Philippines had already begun a review of the number of Timber Licence Agreements. DENR Dept. Admin. Order No. 24 prohibited logging in old growth forests. The number of TLA holders significantly reduced. However, this was not a direct result of the legal case at hand, rather administrative action. In our research interview, it was commented that few local media followed the case and it was barely mentioned in national newspapers. It is however, very well known in the academic arena, serving as a classic text in legal studies and highlighted for its significance in terms of intergenerational justice.

Nonetheless, the right to a healthy environment can be considered integrated into the new national motto, announced in 1998 as “For God, People, Nature and Country.”

Unfortunately, our interviewees also commented upon the increased danger of environmental civil engagement. In April 2006, during a campaign for the protection of the Philippines’ marine environment, Elpidio De La Victoria, a colleague of the plaintiffs’ lawyer in the Supreme Court case, was murdered.

The precedent set by the Philippines Supreme Court could be replicated in other legal systems without much foreseeable difficulty bar a lack of will and opportunity. The ruling recognises a constitutional right to a health environment for both present and future generations, also confirming the legal standing of the latter.

There are some other cases of note, worth mentioning here:

President of the Bangladesh Environmental Lawyers Association, Mohiuddin Farooque, presented to the Court an extended interpretation of the right to life, stated in the Bangladeshi Constitution, which covered the right to a pollution-free environment. Claiming to represent present as well as future generations, Farooque referred to Minors Oposa v. Factoran. The Court however, did not grant locus standi to future generations, ruling that the Constitution of Bangladesh did not expressly provide rights to future generations per the Philippine Administrative Code 1987.

Website of Argentina’s National Programme for the Voluntary Surrender of Firearms. 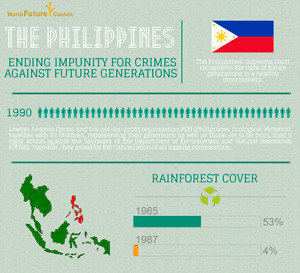 'Minors Oposa vs. Secretary of the DENR' explained!

Want to know more about this policy in a quick and easy-to-understand visual? Check out our infograph on this exemplary policy recognising the right of future generations to a healthy environment!