The Remunicipalisation of Water Services in Paris, France

The Remunicipalisation of Water Services in Paris, France

The Remunicipalisation of Water Services in Paris, France: On 24 November 2008, against exponentially rising water prices, a severe lack of transparency, and poor accountability, the City Council of Paris decided not to renew its municipal water supply contracts with the private companies Veolia and Suez (two of the French powerhouses in global water services), instead remunicipalising water to be under public control.  The production and supply of Paris’ water was unified under the public entity Eau de Paris, which assumed operations of the whole system from 2010 onwards.

Despite the major financial, labour and logistical challenges that the city faced, the transition was managed on time with no difference in terms of service to the end user and impressive financial savings for the people of Paris, and surplus profits have been reinvested for the further development of the city’s water infrastructure. This policy has shown that remunicipalisation of water services can be successful on a grand scale.

On 24 November 2008, against a background of exponentially rising water prices, a severe lack of transparency, and poor accountability, the City Council of Paris decided not to renew its municipal water supply contracts with the private companies Veolia and Suez (two of the French powerhouses in global water services), remunicipalising water back under public control.

The production and supply of Paris’ water was unified under the public entity Eau de Paris, which began running the system in its entirety from 1 January 2010 onwards. Despite the major financial, labour and logistical challenges the city faced, the transition was managed on time with no detrimental effect in terms of service to the end user. Crucially, this new integrated approach led to a more efficient, consistent, transparent and longer-term planning organisation.

Furthermore, the financial outcomes for both re-investment and reductions in terms of the cost of water, were very impressive:

In this case, remunicipalisation has demonstrated that there are viable alternatives that are not only equal to private performance, but which can surpass it, with a greater concentration on sustainability, accountability and transparency.

In 1984, the then-mayor of Paris, Jacques Chirac, signed a 25-year contract with Veolia and Suez to manage Paris’ water supply and billing services.

In 1987, the water production and control mechanism for the two private companies in charge of supply, were also partially privatised with the creation of a mixed capital company, SAGEP (Société Anonyme de Gestion des Eaux de Paris). An outsourcing contract was signed between Paris and SAGEP, whose capital was 70% owned  by the city, 28% by Veolia and Suez (each owning 14%), and 2% by the Caisse des Dépôts et Consignations (CDC), a public national investment bank. The private companies’ shares in SAGEP placed them in a clear conflict of interest since the latter was supposed to oversee the concession, a situation mentioned in a 2003 city audit as creating “a paradoxical role, and partnership relationships that are not favourable to a controlling exercise.”

Such a vast increase led to a strong suspicion of excessively high rates of profit through the provision of essential water services. For example, in other major French cities (with over 100,000 inhabitants), water tariffs only increased by 51.5%, whereas in Paris – over the same period – there was a 90% increase. The contracts were increasingly criticised for their lack of transparency.

Paris’ politicians consequently initiated a series of legal, technical and financial audits, as well as extensively consulting Eau De Paris on  the termination of the contracts. On the 24 November 2008, through the culmination of the rising water prices, the severe lack of transparency, and poor accountability, the City Council of Paris decided not to renew its municipal water supply contracts with Veolia and Suez.

As soon as the decision for the remunicipalisation of water services was taken, a task force was created to organise the transition. It was an enormous undertaking given the short 18 months left before the contract’s expiration, with major challenges of technical expertise, labour and logistics to be overcome.

While there was initial widespread resistance from the private companies over the handover, combined with them believing that their global commercial position had been compromised, the handover was successfully managed and Paris’ water control and management returned to public municipal control.

This policy reform demonstrates that even in a market dominated by water privatisation, the remunicipalisation of water services can be not only effective, but a viable alternative, demonstrating that controlling water under the public sector – as a common good –  allows a more transparent, sustainable and accountable future for water supply and sanitation services.

“The success of the Paris remunicipalisation, our ability to make profits and lower prices, has convinced many other cities, whatever their political colour, that public water is an option.”
Celia Blauel, new head of Eau de Paris.

The remunicipalisation of water services is a highly transferable model implemented by many cities which have taken back control of their collective water systems. Since Paris’s decision to remunicipalise, there have been other examples across France:

Rennes
In 2013, Rennes decided to remunicipalise its water service. Like Paris, Rennes’ water supply had also been managed by Veolia (for over 120 years) and this decision was the result of a long battle between local civil society, the private company and local officials. Returning public control was no easy task, as Veolia had forged strong political ties which ultimately disrupted the transfer of water control from the private to the public sector.

Nice
In 2013, Nice also made the decision to end its contract with the private provider Veolia, remunicipalising management of its water services. Despite conservative political control of the city – with a strong tradition of privatisation – the successes demonstrated by other cities taking control of their water management under local municipalities were identified as the best option to stabilise the cost of water services, and control the water supply with greater efficiency.

Worldwide, cities such as Buenos Aires, Barcelona, Seville, Berlin, and Cochabamba are all examples of how through commitment and effective implementation, remunicipalisation of water services is a viable alternative to privatisation. In the case of Cochabamba, a central Bolivian city, protests over water prices set by private cartels even led to the right to water being enshrined in the Bolivian Constitution. 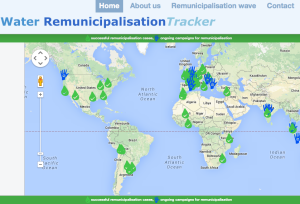 The website showcases cities, regions and countries that have rolled back privatisation and embarked on securing public water for all. Through this tracker, the Water Justice Project aims to increase the visibility of the remunicipalisation trend by bringing together diverse, lesser known yet inspiring experiences, as well as highlighting relevant campaigns that are currently advocating the remunicipalisation of water services.