Our leaders are prisoners of an economic ideology which believes that doing what is necessary to protect our environment costs ‘too much.’ We are confronted not such much of a market failure (for markets respond to the rules and incentives within which they operate) but an accounting failure.

The famous “bottom line” depends on what is included in and omitted from the top lines. If major costs are omitted (‘externalised’), then the bottom line becomes meaningless. After all, you cannot negotiate debt forgiveness or rescue packages with melting glaciers or spreading deserts! The laws of nature always trump the “laws” of economics.

After all, whatever we can do, we can finance. Resources are limited and can be lost, and dissipated unless designed to last, but money can be created debt-free and interest-free by central banks to fund our transition to a sustainable economy. This urgent reform is held up by the misguided belief that all money creation brings inflation. However, this is a myth designed to preserve the very profitable money creation powers of private banks.

New money created against performance, i.e. to produce new goods and services with un- or under-utilised productive capacities is not inflationary. Therefore, funding new eco-production, e.g. moving towards 100% renewable energy as quickly as technically possible, can begin tomorrow. Money is not the problem.

This new production can fund urgent sustainable development goals and create new jobs. It can build and repair infrastructure. The only constraints are resource and productive shortages. While an economic collapse can be overcome in years, an ecological collapse could destroy human civilisation.

In 2017 central banks established the Network for Greening the Financial System (NGFS) and declared the climate crisis as part of their mandate, because the risk resulting from climate change would also threaten financial stability. Central banks should go a last step further and engage actively in supporting global climate finance with new perpetual Green Climate Bonds, because in the end the only way to contain financial risk resulting from climate change is to stop it. 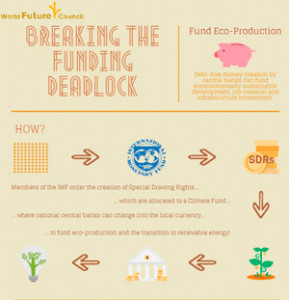 Learn more about debt-free money creation from the infograph above.