Argentina’s National Programme for the Voluntary Surrender of Firearms: Recognising a link between disarmament, health and the economy, Law No. 26.216 paved the way for a highly successful voluntary and anonymous firearm and ammunition buyback. Not only does the policy aim to reduce the number of firearms in circulation, it also promotes a culture of non-violence and peaceful conflict resolution as a primary objective following a collective campaign on the issue by civil society groups.

In 2013, the World Future Council awarded Argentina’s National Programme for the Voluntary Surrender of Firearms with a Silver Future Policy Award, which was held on the theme of disarmament, in partnership with the UN Office for Disarmament Affairs and the Inter-Parliamentary Union. The award was presented on October 23, 2013 at a ceremony held at the UN Headquarters in New York. 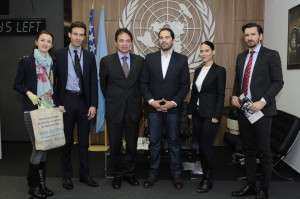 The World Future Council is working to transfer some of the innovative and effective elements of Argentina’s policy to other countries and regions. In 2014, the World Future Council joined the ‘Choose Life Without Weapons‘ coalition led by UNDP Bosnia-Herzegovina to bring together policy-makers and stakeholders to share experiences and practices of weapon collection. In 2015, representatives of both projects met in Sarajevo to continue this collaboration at an ‘Arms Control Exchange.’

Further information on the Argentinian policy, in the Bosnian language, can be found here.

Selection as a Future-Just Policy
This law mandates a voluntary and anonymous gun and ammunition buyback where weapons are exchanged at mobile reception centres against a financial incentive. It has demonstrated what can be achieved when civil society works together, and in partnership with the government, to achieve societal reform, winning the Silver Future Policy Award in 2013.

A highly successful policy, it has reduced the number of civilian firearms in Argentina by over 10%. From the pioneering anonymous payment model to the recycling of meltdown materials with the donation of any profits to a children’s hospital, the policy has met all seven principles of future-just lawmaking. The programme has also excelled in terms of public outreach with campaigns discussing domestic violence, primarily aimed at women, as well as educational activities aimed at children.

Measures of trust and transparency have been built into the law with a regular system of reporting and civil society consultation. With the Ministry of Justice and Human Rights ultimately responsible for programme implementation, a more holistic approach has been employed to build a culture of peace with a public health, rather than military or defence-based, approach.

Innovative improvements to the policy model are ongoing and include the suggestion of a tax on gun manufacturers that would go directly into the healthcare system. Nonetheless, a permanent implementation of the National Programme could be deemed beneficial over annual renewal dependant on political will.

Context
Following an incident in which a 15 year old school boy opened fire at school near Buenos Aires, killing three classmates and injuring five, the Argentine Disarmament Network (RAD) was formed in 2004 in order to create a network for multiple civil society organisations working on armed violence.

In 2006, further tragedy occurred when a mentally ill, yet legitimate gun owner, opened fire in central Buenos Aires injuring six and killing Alfredo Marcenac, a young student. The public outcry which followed led to RAD presenting a proposal to reduce the number of guns in circulation to the Interior Ministry of Argentina (the then responsible agency).

President Néstor Kirchner met with RAD who, realising the extent of the armed violence problem, declared a National State of Emergency under the first article of Law 26.216 and granted his strong support to the National Programme. Overall, the law recognises a link between disarmament, health and economy and chooses to classify violence as an increasingly important health problem in Argentina.

Methods of Implementation
The following video lays out the four principle steps of the programme’s implementation:

Firstly, firearms are surrendered voluntarily and anonymously at a reception centre in exchange for a financial incentive. The incentive is paid by a special cheque created in collaboration with the Argentine National Bank to guarantee anonymity and build trust. Debt forgiveness vis-à-vis RENAR exists for legitimate firearms owners who surrender their weapons owing fines.

The firearms are immediately destroyed in front of the surrenderer, another aspect which increases trust with regards to the weapons being disabled. Donated firearms are destroyed and melted down, with material recycled where possible, and any profit is donated to the Garrahan Children’s Hospital.

The creation of a public awareness campaign on the risks of owning firearms and an 0-800 number for the answering of questions have been important to the programme’s success. Women and children have also been targeted with specific appeals and educational activities.

The initial phase of the programme, as mandated by Law 26.216, was deemed a clear success, with one news report stating that “the government and civil society groups involved in the initiative announced that it has far exceeded even the most optimistic projections.” The programme has since been renewed on an annual basis unanimously by Congress.

The disarmament programme has so far collected and destroyed more than 163,000 arms (February 2015) since its launch, from a total of around 1,400,000 registered arms. This means that over 10% of arms have been destroyed under the National Programme. One million ammunition units have also been destroyed.

A causal link is difficult to prove between programme implementation and homicide/suicide trends for example. However, an extensive analysis has been carried out by the Inter-American Development Bank which suggests that certain downward trends may be attributed to the Programme.

A reduction in criminality is not a direct goal of the programme which aims instead for a societal change towards peaceful conflict resolution and an awareness of the risks of firearm possession. Nonetheless, Argentina, alongside Chile, presents some of the lowest crime rates in Latin America.

The programme implemented by Argentina has multiple aspects which can be incorporated into a transferable model. These include taking a public health approach, the declaration of a national emergency, the revision of the financial incentive against rising costs of living and an emphasis on the role of women and children.

Furthermore, the increased guarantee of anonymity in the payment of the financial incentive was considered a particularly innovative measure and consequentially replicated in the already-existing gun buyback in Brazil. Lastly, the use of mobile reception points has been highly beneficial in reaching more remote areas and increasing municipal involvement in the implementation of the National Programme.

The lack of ‘good-condition’ requirements for firearms handed in may have been criticised but has been justified in the respect that the intention was not to create complications at the point of reception or uncertainty and conflict with gun owners. In addition, no compensation was offered for these weapons yet they were still removed from circulation.

Website of Argentina’s National Programme for the Voluntary Surrender of Firearms.

On March 6-7, 2015, UNDP BiH and the World Future Council provided an opportunity for representatives of government, police agencies, and civil society from Argentina and Bosnia and Herzegovina to exchange their experiences in addressing small arms issues within their unique national contexts.