China’s Law of Prevention and Control of Desertification is the world’s first integrated law dedicated to combating desertification. It provides a legal framework to support the implementation of China’s National Action Programme to Combat Desertification and a host of projects aimed at rehabilitating and revegetating land at risk, from the vast Three-North Shelterbelt “Great Green Wall” Programme to local tree planting initiatives. For its impressive achievements in reversing the trend of desertification, China’s Law was recognised with the Future Policy Silver Award 2017, awarded by the World Future Council in partnership with the UNCCD.

Law of the People’s Republic of China on Prevention and Control of Desertification, 2002

Law of the People’s Republic of China on Water and Soil Conservation, 1991

Land Administration Law of the People’s Republic of China, 1986, revised 2004

Environment Protection Law of the People’s Republic of China, 1989

China’s Law of Prevention and Control of Desertification was adopted in August 2001 and entered into force on 1 January 2002. It is the world’s first integrated law dedicated to combating desertification and sets out a legal framework for the application of China’s National Action Programme to Combat Desertification, and an array of activities aimed at rehabilitating degraded land, from the immense Great Green Wall initiative to local tree planting projects.

The Law fortified China’s efforts to address this very serious challenge and has helped enable the country to reverse the expansive trend of desertification over the last 15 years. In June 2017, the Government announced that the area of desertified land in China shrank by an average of 1,980 km² per year in the 2010-2014 period, which is impressive.

China is also a fully committed party to many international and regional initiatives aimed at fighting desertification and land degradation, including a major new partnership to rehabilitate the Silk Road, and has pledged to meet the Land Degradation Neutrality target.

Whilst some concerns exist around the impacts of ecological migration, this policy is a clear example of a strong law that supports effective nationwide efforts to fight desertification by a wide range of stakeholders, for which it was awarded the Future Policy Silver Award in 2017.

The Government has been taking forceful action against desertification for many decades, the largest intervention being the inter-generational Three-North Shelterbelt “Great Green Wall” Project, launched in 1978, which has seen 66 billion trees planted across the north and northwest.  China signed the UNCCD in 1994 and ratified it in 1997. In 1994, the National Bureau to Combat Desertification was established, and in 1996 China submitted its first National Action Programme to Combat Desertification to UNCCD, which was later modified in 2000 and 2003. The Law on the Prevention and Control of Desertification provides a legal framework for implementing this Action Programme and the many integrated projects aimed at controlling desertification. The plan is described as the “soft policy”, while the law is the “hard policy”.

The stated purpose of the Law is to: “(Article 1) prevent land desertification, rehabilitate desertified land, maintain eco-safety, and promote sustainable economic and social development. (Article 2) All activities for prevention of land desertification and for rehabilitation and exploitation of desertified land in the territory of the People’s Republic of China shall be conducted in accordance with this Law.”

The objectives outlined in the National Action Programme, which this Law supports, are:

The State Forestry Administration, under the leadership of the State Council, is responsible for organizing, coordinating and guiding efforts to implement this Law. Administrative departments for agriculture, water conservation, environment and meteorology assume their responsibilities and coordinate activities. Local people’s governments at or above County level are charged with taking effective measures to combat desertification in accordance with the Law.

The Law sets out the basic guidelines, responsibilities and obligations, management system, and the legal responsibilities and penalties in cases of violation. It instructs the governments of provinces, autonomous regions and municipalities to formulate plans for their designated areas, in compliance with the Law and coordinating with the National Action Programme, and sets out the system for gathering data, early-warning, monitoring and reporting. Each administrative region must inform the relevant government authority when and where land is being desertified, and put a stop to the activities causing it.

The National Action Programme is an enormous undertaking and is divided into three levels: key large-scale national projects, regional demonstration projects and local, non-governmental and private projects. Private companies are increasingly active. All citizens in regions impacted by desertification are expected to participate in the programme. The National Action Programme is fully integrated into the Five Year Plans of the Government. The current, 13th Five Year Plan period (2016-2020) includes priority efforts towards reforestation and reversing deforestation. A national survey of desertification is carried out every four years, most recently in 2014, to monitor progress.

The Law applies to all local authorities and people in China and is wide-reaching in scope: “Units or individuals that use desertified land have the obligation to rehabilitate the land.” (Article 6)

The Law stipulates the activities that are prohibited on land experiencing or threatened by desertification, such as cutting or digging shrubs; provides for the creation of enclosed reserves where all activities damaging vegetation are prohibited; and states that “local people’s governments at or above the county level shall make plans to help the farmers and herdsmen living in the enclosed and forbidden reserves or desertified land move out of the areas and settle down appropriately.” (Article 22)

The law provides the legal basis for establishing a system of market-based cost/benefit incentives to encourage land rehabilitation by land-users, whether individual farmers or large companies. Under the Law, local governments are instructed to apply “preferential policies to encourage and support units and individuals in their efforts to prevent and control desertification” (Article 32).  This can include financial awards, tax exemptions, and land use rights up to 70 years. The law also calls for financial compensation to be awarded to people who change to a more sustainable land-use, e.g. shifting land from farming or grazing to forest or other vegetation.

One of the largest land rehabilitation schemes, which is directly tied to the incentives/benefits provisions of the Law, is the National Grain for Green Programme, involving 1060 counties in 22 provinces with a goal to withdraw 3.67 million ha of dry land farming and degraded steppe, and 5.13 million ha of Aeolian desertified land, to be rehabilitated through reforestation and re-vegetation. Through this programme, farmers, herders and other land users are compensated and rewarded for undertaking rehabilitation activities, or for relocating elsewhere.

The Law encourages the private sector to participate in combating desertification through subsidies and tax exemptions, for example for agroforestry or eco-tourism. One of the biggest private interventions is a pioneering wealth-generating model to adapt to climate change and recover degraded desert land in China that was showcased by the Elion Resources Group at COP21 in Paris in 2015. Elion has been working in the Kubuqi Desert since 1995, and in 2013 won the first ever UNCCD Global Dryland Champion Award in recognition of this work.

China is also actively engaged in international efforts to combat desertification. For example, in June 2016, China and the UNCCD launched the Joint Action Initiative (JAI) to combat desertification, rehabilitate land and mitigate the effects of drought on the Silk Road. The goal is to plant 1.3 billion trees in ecologically vulnerable regions, rehabilitating 1.3 million ha of land over the next 10 years. JAI is linked to the 2030 global target of achieving land degradation neutrality, to which China is also committed.

In its 2006 report to the UNCCD, China reported that the process of desertification had been reversed from an average annual expansion of 10,400 km² in the late 20th century to an average annual contraction of 7,585 km² during 1999-2004. According to the latest national survey, completed in 2014, the country has 1.73 million km² (1.73 billion ha) of land classified as undergoing desertification. While the overall area is decreasing, in some regions desertification continues to expand. In June 2017, the Government announced that the area of desertified land in China shrank by an average of 1,980 km² per year in the 2010-2014 period, a sharper decline than 1,717 km² per year from 2005 to 2009 period, and 1,283 km² between 2000 and 2004. This represents remarkable progress.

Sand storms are a huge problem in China, affecting many of its major cities. The area of desertified land due to wind erosion in 2004 was 1.8 million km². This Aeolian desertification through wind erosion is reported to have been reversed from a 3,600 km² per year expansion during 1988-2000, to an annual decrease of 1,375 km² from 2000 to 2010. Beijing now only experiences two to three sandstorms each year, compared with over 13 around the year 2000, according to official data released in 2016.

Since 2000, the central Government has invested over US$ 30 billion (RMB 217.22 billion) in a series of ecological construction projects, including the Natural Resources Conservation project, the Returning Farmland to Woodland or Grassland project, the Sandstorm Source Control surrounding Beijing and Tianjin Area project, the Three-North Shelterbelt System Construction, the Wildlife Protection and Nature Reserve Construction project, and the project of Wetland Protection and Restoration. The largest intervention is the ongoing inter-generational Three-North Shelterbelt “Great Green Wall” Project that has already planted over 66 billion trees across 30 million hectares of land in the north, northeast and northwest of the country.

However, it should be noted that the implementation of the Law has also raised some concerns. One is that the desertification prevention actions are not well defined, leaving the door open to local authorities distributing financial or land-use rewards to people or projects that are not actually ecologically beneficial. Another concern relates to the ecological migration of people from land deemed at risk of desertification. A recent United Nations Special Rapporteur report indicated there can be a lack of adequate avenues for appeal to address grievances.

Overall, the Law has helped greatly in enabling the country to reverse the expansive trend of desertification over the last 15 years. It has also increased China’s commitment to many international and regional initiatives aimed at fighting desertification and land degradation, establishing China’s position as an exemplary policymaker in the fight against land erosion and degradation internationally. In the 2016-2020 period, China intends to rehabilitate 10 million hectares of desertified land, which amounts to more than half of the country’s reclaimable desert land.

While the enormous scale of the problem facing China makes it a very particular case that may not be directly transferable to other countries, China’s Law, and the strong commitment shown to this challenge, could be useful as a model in many respects.

China (2006), National Report to the UNCCD on its National Action Programme to Combat Desertification

UNCCD (2016), China and the UNCCD launch initiative to curb Desertification along the Silk Road

UNEP (2016), Green is Gold: The Strategy and Actions of China’s Ecological Civilization 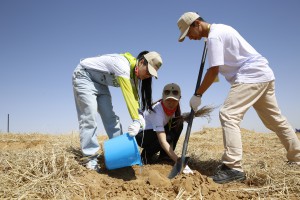 China's Law of Prevention and Control of Desertification is the world’s first integrated law dedicated to combating desertification. It provides a framework for China’s National Action Programme and a host of projects aimed at rehabilitating land at risk.