Council of Europe’s Co-Management System of the Youth

Council of Europe’s Co-Management System of the Youth

The Council of Europe’s Co-Management System is the longest-standing practice of participatory decision-making in the world, and one of the very few examples of shared decision-making between governments and young people with power shared in full 50:50 parity. Through its constant training and education, as well as its continuous grant-making, the Council of Europe has influenced and improved the youth sector profoundly. Its model for co-management has been applied in a wide range of other governance and/or policy contexts. The Council of Europe’s comprehensive Co-Management of the Youth Sector is recognized with Future Policy Bronze Award 2019 for Political Participation and Civil Engagement of Youth, awarded by the World Future Council in partnership with UNDP and IPU and supported by ILO, UN Secretary-General’s Envoy on Youth and Youth Policy Labs (YPL). 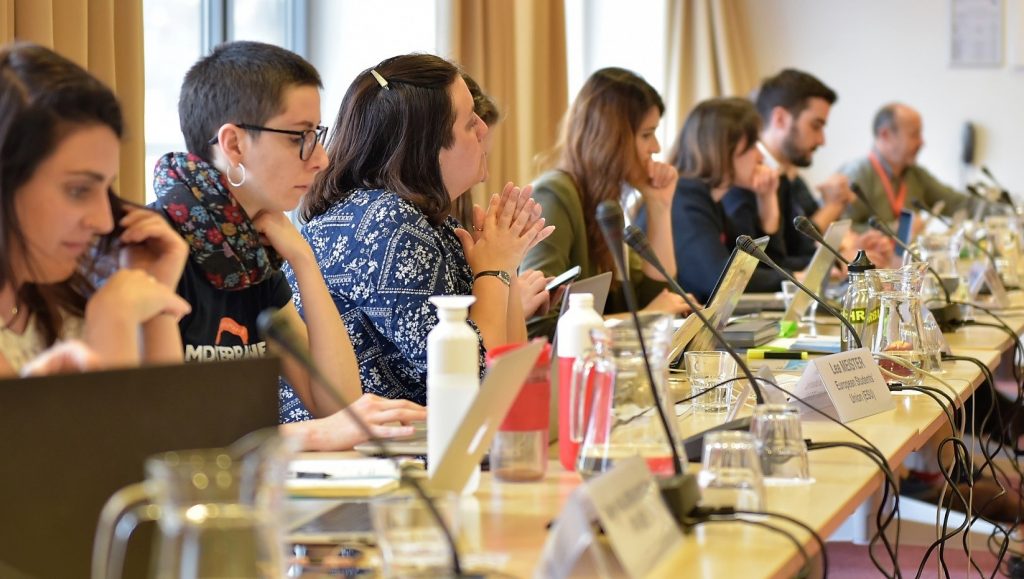 Council of Europe’s Co-Management of the Youth Sector, 1972

The co-management system – as the main and only governing framework for the youth sector of the Council of Europe – is related to all thematic youth policies of the organization, as it prescribes how these policies are formulated, discussed, adopted, implemented and evaluated.

The Council of Europe’s Co-Management System shows how integrated and inclusive youth policymaking can be successfully formulated, discussed, adopted, implemented and evaluated. With a cumulated volume of more than 130 million Euros, its study sessions in its European Youth Centers have included more than 70,000 youth leaders and youth activists. Through its constant training and education, as well as its continuous grant-making, the Council of Europe has influenced and improved the youth sector in Europe profoundly.

In its 56 years of existence, the programme has expanded and proven to be resilient and sustainable, while at the same time also making space for new voices and integrating new youth organizations and networks as well as young people not involved in civil society associations. For its noteworthy accomplishments, the Council of Europe’s Co-Management of the Youth Sector is recognized with Future Policy Bronze Award 2019 for Political Participation and Civil Engagement of Youth.

The Council of Europe is the smaller, yet older, of the two main supranational organizations in Europe. Founded in 1949, its main role is the protection and safeguarding of human rights in Europe, based on the European Convention on Human Rights, through independent monitoring mechanisms  and the European Court of Human Rights. The Council of Europe has played a pivotal role for youth policy and youth work in Europe and beyond. The organization’s youth sector has its roots in the 1960s, when the Parliamentary Assembly suggested the creation of a European Youth Centre in its resolution 186 (1960).  In 1963, an experimental European Youth Centre was set up, at first without a dedicated physical building. The programme was designed and overseen by a board comprised of six governments and five youth NGOs. In those early days of co-management, there was not quite a 50:50 parity between governments and civil society.

Ten years later followed another reform, that shook up the structures on the side of civil society in particular, because it reformed the Advisory Council to include youth organizations and youth structures that were not members of the European Youth Forum, in an attempt to broaden the inclusiveness of the co-management system. The Joint Council and Programming Committee were also introduced.  Following a proposal put forward in 1990, the Council of Europe’s Committee of Ministers decided in 1993 to open a second European Youth Centre in Budapest, Hungary. The centre opened in 1995 as the first permanent service of the Council of Europe in a country of Central and Eastern Europe, and has since been governed by the co-management system of the Council of Europe’s youth sector. More than 55 years after it was initiated, the co-management system remains fully functional, and has become one of the world’s longest lasting examples of participatory democracy in the context of a supranational institution.  The co-management approach has been mirrored at international, national, regional and local level across and beyond Europe.

The Council of Europe describes its co-management system with these words:

“The Council of Europe’s ground-breaking co-management system is a living example of participatory democracy. It is a place for common reflection and co-production, combining the voice of young Europeans and that of public authorities responsible for youth issues, leading to a sharing and evaluation of experience. Thanks to this dialogue, where each party has an equal say, ideas and experiences can be exchanged, in a spirit of mutual understanding and respect, giving legitimacy to the Joint Council on Youth’s decisions.”

Co-management started right away with the commencement of youth activities, in 1963. Co-management as it is known today, with full 50:50 parity between governments and civil society, was institutionalized in 1972.

Both sides of the aisle, governments and civil society, have their own space for exchange and discourse, the European Steering Committee for Youth (CDEJ) and the Advisory Council (AC), respectively. For their common reflection and co-production of policy priorities, the Joint Council exists, whereas the smaller Programming Committee is responsible for the translation of these policy priorities into the youth sector’s programming. Each of these bodies has terms of reference and rules of procedure that are public. The terms of reference can only be changed by decision of the Committee of Ministers, whereas the rules of procedure are adopted and adjusted by each body directly.

For each member of each body, the Council of Europe bears the travel and subsistence expenses in full. In addition, training and education opportunities are frequently offered to members of these bodies, through summer schools for governmental representatives and training courses for civil society representatives. All reports of all bodies are publicly available, in abridged versions for the general public and in full length on a website with restricted access  for all members of the various co-management bodies.

Co-management is widely expected to continue to exist by every stakeholder group. It could be further strengthened by adjusting the size of the non-governmental Advisory Council, currently consisting of 30 members, to the size of the governmental European Steering Committee for Youth, currently consisting of 50 members, which would also broaden and deepen the diversity of youth representation in the Council of Europe’s Co-Management system. Another idea to improve and strengthen the co-management system, and in particular its transfer to other governance and policy contexts, is to develop a quality label for co-management, similar to the existing quality label for European youth centres.

Co-management was part of the core principles during the foundation of the Council of Europe’s youth sector. While a radical idea at the time – an institutionalized form to share power with young people – it has never been at risk of being eliminated, and is in substance or value not questioned by any stakeholder of the organization or the wider youth sector.

Between 1972 and 2008, the co-management system awarded an estimated 8,000 grants through the European Youth Foundation with an overall value of more than 100 million Euros.  In the same period (1972-2008), the co-management awarded study sessions involving more than 50,000 young people as participants.

A particularly powerful effect of the co-management system is that is has enticed young people with minority backgrounds to organize themselves in order to have a voice, and that it has not only encouraged, but also actively supported, these new organizations – including the Forum of European Roma Young People (FERYP), Young Women from Minorities (YWFM), the Forum of European Muslim Youth and Student Organisations (FEMYSO), and – most recently – the Voice of Young Refugees in Europe (VYRE).

The substantive approach to co-management modelled by the Council of Europe can be easily transferred to other policy contexts as well as other governance – all it takes is the political will to share power equally between policymakers and young people, in the context of the youth sector, or between policymakers and citizens, in the wider context of policy governance.

There are a range of contexts to which the model has already been transferred, for example: the Organization for Security and Co-operation in Europe (OSCE) has adopted the co-management model for its new field of youth programming;  the Regional Youth Cooperation Office for the Balkan region (RYCO) operates a co-managed governance system; Croatia, Lithuania and Finland have all adopted a co-management system for their youth policy programming at national level;  and local and regional authorities in more than a dozen European countries are governing their youth programming through co-management systems, including municipalities in Estonia, Finland, Germany, Greece, Iceland and Portugal.

Council of Europe. Resolution 72 – On A European Youth Foundation, 1972

If you are under 16 and wish to give consent to optional services, you must ask your legal guardians for permission. We use cookies and other technologies on our website. Some of them are essential, while others help us to improve this website and your experience. Personal data may be processed (e.g. IP addresses), for example for personalized ads and content or ad and content measurement. You can find more information about the use of your data in our privacy policy. Here you will find an overview of all cookies used. You can give your consent to whole categories or display further information and select certain cookies.