Launched in the aftermath of a deep economic crisis and set up on the basis of a broad urban consultation, Quito’s Participatory Urban Agriculture Programme promotes the production, processing, marketing and distribution of healthy organic food from urban and peri-urban gardens in the Metropolitan District of Quito. In its 16 years of existence, AGRUPAR has continuously expanded and considerably advanced food security, job creation, income generation, environmental management, gender equity, social inclusion of vulnerable groups such as women, elderly and migrants, and micro-entrepreneurship. Due to its impressive socioeconomic and environmental impact, its participatory and holistic approach involving the most vulnerable groups, and its full respect for the Future Justice Principles and Elements of Agroecology, AGRUPAR was recognized with the Future Policy Silver Award 2018, awarded by the World Future Council in partnership with FAO and IFOAM – Organics International. 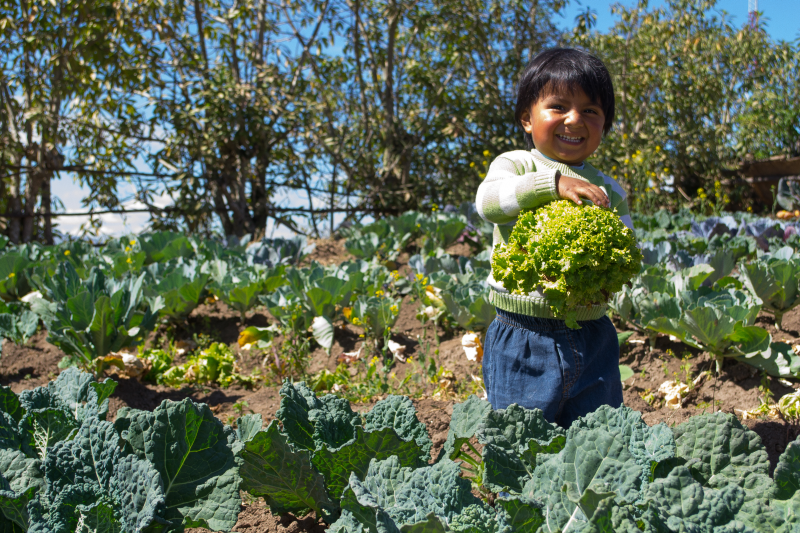 Constitution of Ecuador of 2008

National Plan for Good Living of 2013

Plan of Development for the Metropolitan District of Quito of 2015

Municipal ordinance No. 084 on Social Responsibility

Municipal ordinance No. 048 on Urban Fauna

AGRUPAR shows how an integrated approach can lead to great success. It explicitly recognizes and formulates the role of urban agriculture for wider social, ecological and economic policy aims, and works along the entire food chain, from production to promoting value-adding entrepreneurial activities, from marketing and establishing dedicated commercialization channels, to food waste reduction.

Our “Best Policies” are those that meet the Future-Just Lawmaking Principles and recognise the interconnected challenges we face today. The goal of principled policy work is to ensure that important universal standards of sustainability and equity, human rights and freedoms, and respect for the environment are taken into account. It also helps to increase policy coherence between different sectors.

Between 1980 and 2000, the arrival waves of migrants from other parts of the country almost doubled Quito’s population, from 780 000 to 1.4 million. In inner-city barrios and settlements built on surrounding hillsides, many people resorted to small-scale agriculture, based on conventional practices, to feed their families. This meant that urban agriculture in Quito became widespread, but was unrecognized. With its geographic position and mountainous topography, Quito is highly vulnerable to climatic changes, already experiencing higher average temperatures, an overall decrease in rainfall, and more extreme rain events, which cause landslides. In the late 1990s, Ecuador suffered a severe economic crisis, which resulted in a sharp drop in public spending and an increase in internal migration and emigration. In 1999, 48 per cent of Quito’s population was living below the poverty line. The city urgently needed to address overcrowding and food insecurity.

In 2000, Ecuador’s capital hosted a meeting of local government representatives from Latin America and the Caribbean. The outcome of this event was the landmark Quito Declaration, the first to call on the region’s cities “to embrace urban agriculture”. In the same year, an urban consultation on agriculture was organized by Quito, resulting in a pilot programme, launched in September 2000 and co-funded by the municipality and international partners, which increased food production in home gardens, promoted the recycling of organic waste, and established a community plant nursery. It also developed a microcredit system and implemented projects for processing and marketing produce.

The lessons learned were used to develop a municipal programme aimed at improving the food security of vulnerable populations in Quito’s urban, peri-urban and rural areas. The Participatory Urban Agriculture Programme (AGRUPAR) was launched in 2002 and was initially managed by the city’s Directorate for Sustainable Human Development. Since 2005, AGRUPAR has been implemented by the Economic Development Agency (CONQUITO), whose mandate is to create an entrepreneurial, sustainable and innovative city. Today, AGRUPAR is one of CONQUITO’s most successful initiatives. Key moments in its development over the years were the launch of the bioferias (bio-fairs) in 2006, the organic certification for garden groups from 2007 (renewed every year), and the certification of labour competencies of urban farmers from 2009 and 2012, with the help of the Ministry of Social Development and funding from the National Technical Secretariat for Training and Education. In 2010, the project was recognized within the organizational structure of CONQUITO and since then has received exclusive municipal funds for its execution. In 2012, a Resolution conferred more formality to the execution of AGRUPAR within CONQUITO, meaning that urban agriculture in Quito is now institutionalized as a permanent service. In 2013, a Collective of Urban Farmers (3,000 members) was formed.

Especially targeted are female-headed households, the elderly, children and youth, social and rehabilitation centres, migrants and education units, amongst others. Participants are from poverty quintiles 1 and 2, the level of education is low, and 30 per cent receive government human development vouchers.

Responsible for policy is the Metropolitan District Municipality of Quito (DMQ). AGRUPAR is implemented through Quito’s Metropolitan Economic Development Agency (CONQUITO), reporting to the Secretary of Productivity and Competitiveness of the DMQ, with the engagement of NGOs, academia and students.

AGRUPAR’s implementation strategies are the following: technical assistance and capacity-building; creation of production infrastructures and livestock improvement; management of micro-entrepreneurship; marketing and promotion; access to microcredit; and applied research.

The Programme has four main axes:

Budget: Since 2010, AGRUPAR has had its own budget within the annual operational plan of CONQUITO. In 2018, its budget is USD 283,336, mainly financed by the DMQ (about USD 255,842) and a self-management fund (sale of services, about USD 27,495). Ninety per cent of the budget is allocated to financing the technical team, the remainder is used for organic certification, developing the Food Policy of Quito, the Interpretation Center for Urban Agriculture of Quito, communication, and technical assistance.

Over its 16 years of existence, AGRUPAR has achieved impressive results. As of 2018, it reaches 4,500 beneficiaries from highly vulnerable populations annually and covers 83 per cent of the district. Since its establishment, the Programme has: directly benefitted 73,936 people and indirectly helped a further 113,774; implemented a total of 3,679 urban gardens, covering 32 hectares, of which 60 per cent are family gardens and 26 per cent are managed by 380 organized groups (with 1,520 participants); incorporated 21,746 persons in trainings, of which 84 per cent were women; organized 16,172 technical trainings and 81,886 cases of technical assistance; and built 2,051 productive infrastructures (1,072 micro-greenhouses and 979 drip irrigation systems).

Today AGRUPAR’s participants annually produce more than 960,000 kg of food products. Almost half of the production (47 per cent) is used for home consumption, strengthening food security and diversifying the diets of the 12,000 participating urban farmers and their families, while the other half is marketed. The Programme created 17 bio-fairs where 105 types of food are offered. Through these, 25% of the produce is commercialized, for about USD 350,000 per year. Since 2007, a total of 6,663 bio-fairs have been organized and all produce is organic. Both formal organic certification for orchards with marketing possibilities (since 2007) and the internal control system (SIC, since 2013) are used. As of 2010, the Programme had created five associations of producers and therefore generated better opportunities for the commercialization of products. Moreover, 48 community banks were created to provide credit services to participants.

Besides strengthening food security, AGRUPAR improves the incomes of vulnerable groups. Half of the participants generate revenue as well as employment. Around 177 started entrepreneurships, of which 104 are formalized. On average their income is USD 3,100 per year and, since 2016, they have created 337 jobs. On average producers benefit from USD 175 of additional income per month. Total savings are more than three times the value of the government human development voucher (USD 50 a month). However, most of 480 participants surveyed in 2010 said that for them the increased quality of life, improved nutrition and health, and personal empowerment were even more important. It is noteworthy that AGRUPAR enjoys a high acceptance among its beneficiaries (over 91 per cent).

AGRUPAR also promotes healthy diets and sustainability. Nearly 170,000 consumers have attended the bio-fairs and were sensibilized on healthy diets and nutrition. Surveys have identified increased dietary diversity among producers and their families. Among the environmental benefits are land rehabilitation (about 32 hectares) and soil protection thanks to organic production, climate resilience and water savings through adapted production techniques, including small greenhouses, drip irrigation, rainwater harvesting, and reforestation, less pollution as urban food production has fewer transport, refrigeration and packaging needs, increased organic waste recycling (0.65 tonnes of waste per family per year) and enhanced biodiversity (e.g. 72 edible plant species are maintained in gardens).

In sum, the improvements in access to and local availability of healthy food for vulnerable groups (both producer and consumer families) can be considered the main impact of the programme. Increases in income, personal empowerment and improved relations within the family as well as the community are other important impacts, as is the conversion of abandoned and waste spaces to productive land.

AGRUPAR could well serve as a model for other cities and form the basis for a national policy on local production. CONQUITO has favoured observation tours and exchanges of experiences as well as transfer of methodologies, including among ministries and NGOs, for example the Ministry of Agriculture, Livestock, Aquaculture and Fisheries and the Peace Corps.

Since 2015, AGRUPAR contributed to both the City Region Food Systems Project of FAO and the RUAF Foundation, which evaluated Quito’s food system. As a result, AGRUPAR staff decided to work towards a food policy for the city in a more systemic sense, within which urban agriculture is a strategic activity.

FAO, Urban and Peri-urban Agriculture in Latin America and the Caribbean – Quito, 2014 (in English)

AGRUPAR was developed on the basis of a broad, largely women-led community consultation. It explicitly recognizes the role of urban agriculture for wider social, ecological and economic development and works along the entire food chain.