Launched in the context of endemic unemployment, the Expanded Public Works Programme (EPWP) provides income relief through temporary work. What makes it innovative is its large-scale nature, its inter-ministerial coordination, its expansion beyond the infrastructure sector to include non-state, social, environmental and cultural sectors, and the fact that it is directly targeted to youth and vulnerable groups.  Since its inception, it has generated over 8 million work opportunities. In the most recently completed phase of the programme, 66% of beneficiaries were women, 46% were youth and 1% were people with disabilities. Due to its impressive socioeconomic and environmental impact, its participatory and holistic approach, its large respect for the Future Justice Principles, the EPWP is recognized with Future Policy Bronze Award 2019 for Economic Empowerment of Youth, awarded by the World Future Council in partnership with UNDP and IPU and supported by ILO. UN Secretary-General’s Envoy on Youth and Youth Policy Labs (YPL). 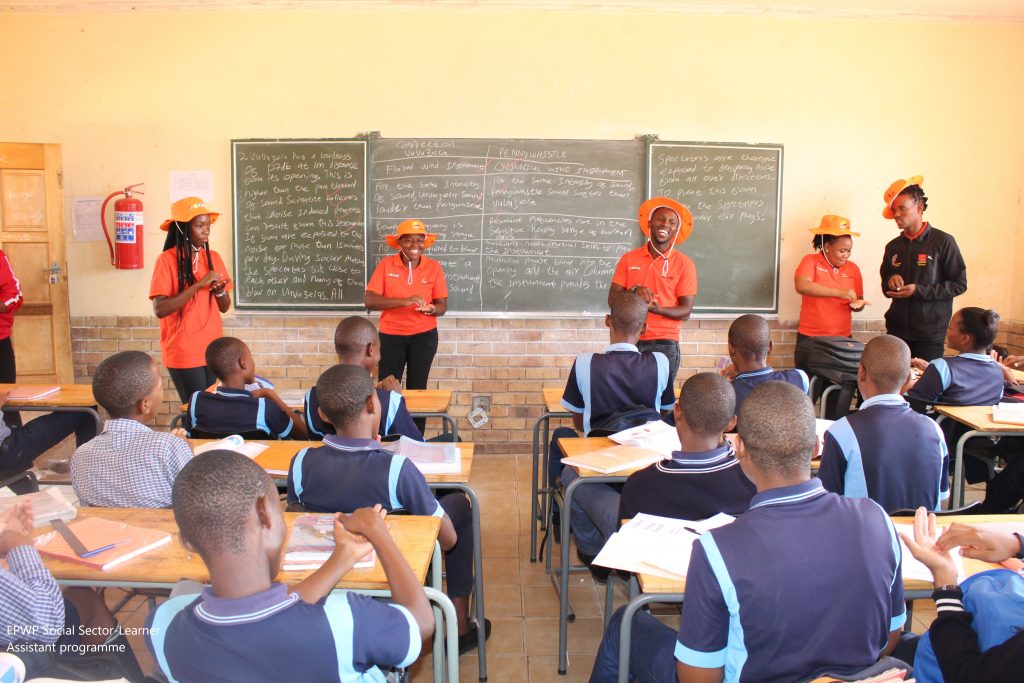 South Africa’s EPWP shows how a large-scale cross-ministerial public works programme can achieve great success. Its cross-cutting expansion beyond the infrastructure sector to include non-state, social, environmental and cultural sectors has successfully tackled endemic unemployment and provided income relief through temporary work. The programmes holistic approach is evidenced by its successful targeting of youth and vulnerable groups.

In its 15 years of existence, the programme has generated over 8 million work opportunities. In the most recently completed phase of the programme, 66% of beneficiaries were women, 46% were youth and 1% were people with disabilities. Due to its impressive socioeconomic and environmental impact, its participatory and holistic approach, its large respect for the Future Justice Principles, the EPWP is recognized with Future Policy Bronze Award 2019 for Economic Empowerment of Youth.

Conceptualisation of the EPWP was partly based on large-scale, long-term programmes established elsewhere in sub-Saharan Africa during the 1970s to 1990s. The use of modern labour-intensive methods lay at the core of those programmes. Some of the reasons for the implementation of such programmes include covariate shocks (which may include natural disasters, macro crises, or seasonal labour demand shortfalls), protection of households from temporary job losses and poverty alleviation to part-time employment creation. The objectives of most of these programmes include the promotion of infrastructural development, raising the income levels of the poor or unemployed, and reducing poverty and the poverty gap ratio amongst poor and marginalised groups.

Despite the economic and social progress made in the post-Apartheid era, poverty, unemployment and inequality remain key chronic challenges in contemporary South Africa. Since 1995 there has been partial growth of employment opportunities which, however, has not been sufficient to absorb the growing workforce. With a yearly growth between 1% to 2%, the unemployment rate reached 30.7% in 2002. In September 2003, 4.6 million people were unemployed in terms of the strict definition and 8.3 million in terms of the broad definition. In order to tackle this endemic unemployment crisis, the South African government developed an all-round approach. Two long term strategies have been adopted, firstly, to encourage economic growth and in turn, create more job opportunities; secondly, to improve the education system so to respond to skill mismatch affecting the labour market. Short to medium-term strategies have been put in place to contribute towards these long-term strategies.  The Expanded Public Works Programme (EPWP) falls into this category. In policy terms, the EPWP has an important role of ‘contributing to the social security net and to community development, and possibly as a stepping stone to formal employment or self-employment’.

In February 2004, former Head of State, Mr Thabo Mbeki, stated in his SONA that the EPWP would generate at least one million job occasions in its first five years. The EPWP was officially launched in May 2004 and it has now reached its third phase. It is a nationwide Government programme delivered through existing provincial government structures to avoid duplication of institutions and to increase its cost efficiency. The national and provincial governments, as well as their underlying municipalities, allocate a part of their budget for the procurement of services via the EPWP framework.

The Expanded Public Works Programme (EPWP) provides poverty and income relief through temporary work for the unemployed to carry out socially useful activities.  It is a nationwide Government programme coordinated by the Department of Public Works, of which three phases have been implemented so far (1. 2004-2009; 2. 2009-2014; 3. 2014-2019).  Currently the programme is in its fourth phase (2019-2024) and an overarching policy is being elaborated. The EPWP is implemented across four sectors and across three spheres of government (national, provincial and local).

EWPW’s implementation strategies are the following:

In its first phase, the goal was to create jobs for a minimum of one million people.  In phase two, the goal was to create 4.5 million work opportunities. The third phase targeted the creation of 6 million work opportunities by 2019.  The fourth phase aims to create 5 million work opportunities. The Minister of Labour is responsible for setting the conditions of work applicable to all EPWP participants. The stipulated conditions include defining an annually adjusted minimum wage, as well as the hours of work, overtime rates, entitlement to maternity leave, employment injury, and health and safety considerations, and to satisfy some of the provisions under ILO’s Recommendation No. 202 concerning national social protection floors.  The EPWP plays an important role of contributing to the social security net and to community development, and possibly as a stepping stone to formal employment or self-employment. Currently, the EPWP, is part of the national vision. It is domestically financed and has secured medium-term financing. The Government has promoted and invested in its innovation and adaptation. Under the EPWP framework, a number of initiatives specifically targeted to youth have been established. In recent years, the training component was increased and since 2010 the Government trained a total of 24,647 EPWP participants.

Since its inception, the EPWP has generated over 8 million employment opportunities. The phase 1 target to create a cumulative total of 1 million job opportunities was attained a year ahead of schedule in 2008 and surpassed the goal (with about 1.4 million work opportunities). Phase 2 attained 80% per cent of the planned 4.5 million work opportunities by 2014. EPWP has successfully included vulnerable groups such as women, youth and persons with disabilities to its pool of participants, reaching 69%, 46% and 2% respectively in 2014.  Phase 1 achieved a significant increase in income levels and the percentage of households who were able to save increased from 14.5% to 22.8%. Almost 80% of respondents recorded positive changes to their own lives. Overall, nearly 90% said that the assets created by the EPWP would be sustainable. 55% were still working on EPWP projects and 45% had exited the programme. Of the latter respondents, 27% were employed (50% full time, 50% part-time), as opposed to 73% unemployed. Phase 2 has been a global pioneer in environmental services with its programmes Working for Water (WfW), Working on Fire, Working for Wetlands, and People & Parks. The WfW has cleared over 2 million hectares of alien invasive plants and prevented loss of 71% of grazing. A total of 10,469 projects were rolled out during 2015-16. According to STATS SA, 70% of past participants have transitioned to longer term self or formal employment.  Research showed an increase in school attendance as well as student participation from households that had members who participated in EPWP. Phase 3 created over 4.5 million out of the targeted 6 million work opportunities. Of these, a total of 66% benefitted women, 46% youth and 1% people with disabilities. Over 50,000 participants were trained, of which more than 31,000 received accredited training.

In terms of impact on youth, youth-focussed programmes and initiatives developed under the EPWP were crucial to increase opportunities for young people and improve their role and value in society.  However, the South African Youth Council judges that far more could be done for youth and training opportunities should be expanded

Potential as a Transferrable Model

The EPWP is seen as a successful country experience, which shows that it is possible to provide employment-based basic income security for working age persons. As public works programmes are becoming increasingly popular component of the social protection package promoted by the UN and development agencies in low- and middle-income countries.  EPWP’s innovative components could be of particular interest: its cross-government participation and its extension beyond the conventional infrastructure sector. EPWP elements have been exported to Greece and Ethiopia. In 2017, Ghana came to study the EPWP.

McCord, A. The role of public works in addressing poverty. Lessons Learnt in Public Works Programming, 2017