Indigenous Rangers are at the forefront of turning around environmental degradation across Australia. 75 Indigenous Protected Areas, covering over 67 million hectares, now make up more than 44 per cent of the National Reserve System and have created the largest contiguous area of protected arid land in the world. This is thanks to Australia’s Indigenous Protected Areas (IPAs) Programme and the Working on Country Indigenous Ranger Programme, which together enable indigenous people to protect and manage the land and resources in the IPAs. The environmental, social and economic benefits of IPAs and Indigenous Rangers are impressive. For their noteworthy achievements, these two Australian programmes were, together, recognized with the Future Policy Bronze Award 2017, awarded by the World Future Council in partnership with the UNCCD.

The Indigenous Protected Areas (IPA) Programme and the Working on Country Indigenous Ranger Programme are considered flagship policies, frequently held up as rare examples of successful, popular Government indigenous policies. They have cross-party support, have survived multiple changes of government, and are genuinely led by indigenous people. Indigenous-driven campaigns calling for more funding and support for these programmes to mark their 20th and 10th anniversaries in 2017 have generated wide support and helped secure their continued expansion.

The environmental, social and economic benefits of IPAs and Indigenous Ranger jobs are impressive and increasingly well-documented, with a 2016 report commissioned by the Government finding that the programmes delivered a three to one return on public investment due to a range of positive outcomes. Indigenous Rangers are at the forefront of turning around environmental degradation right across Australia; 75 IPAs now make up 44.7 per cent of the National Reserve System and have created the world’s largest contiguous area of protected arid land. They have made it possible for Australia to work towards meeting its international commitments to both the Aichi Biodiversity Targets and the Declaration on the Rights of Indigenous Peoples.

Due to the exceptional support for these policies from both indigenous communities and the Government, the value and respect for indigenous culture and knowledge they demonstrate, and their success in bringing vast areas of largely arid or semi-arid remote land under protection, the two programmes received the Future Policy Bronze Award in 2017.

The Indigenous Protected Areas (IPAs) programme was launched in 1997, whilst the Working on Country Indigenous Ranger Programme, that supports the employment and training of indigenous Rangers to manage the land and resources in IPAs, followed in 2007.

The programmes emerged due to three factors: the return of land and sea areas to traditional owners through land rights and Native Title since the mid-1990s; the need for livelihood opportunities on these largely very remote returned lands; and the realisation by the Government, land managers and other stakeholders that the threats to Australia’s biodiversity and landscapes are severe, increasing, and cannot be addressed without including Indigenous lands in the protected network, under the active management of Traditional Owners. Threats to the world’s driest continent include native species extinction, land and soil degradation, wildfires, drought, invasive species, and damage caused by non-native feral animals, all exacerbated by climate change.

IPAs were also a response to a commitment by the Australian Government to establish a protected area system over the full range of ecosystems in Australia in accordance with the 1994 IUCN guidelines. Since the 1993 Native Title Act, about 2.5 million km2, approximately 23 per cent of the land mass of the country has been returned to Traditional Owners, much of it in a degraded state, making Indigenous landowners among the most important stewards of Australia’s fragile landscapes and severely threatened biodiversity. The 2016 Australian State of the Environment Report stated that: “Indigenous people, their land, and their cultural and natural resource management activities make core contributions to managing Australia’s environment. Indigenous lands contain significant levels of biodiversity, and long-term investment in Indigenous land management programmes has delivered environmental, cultural and economic benefits.”

According to a description agreed by indigenous partners, an “Indigenous Protected Area is governed by the continuing responsibilities of Aboriginal and Torres Strait Islander peoples to care for and protect lands and waters for present and future generations. Indigenous Protected Areas may include areas of land and waters over which Aboriginal and Torres Strait Islanders are custodians, and which shall be managed for cultural biodiversity and conservation, permitting customary sustainable resource use and sharing of benefit.” IPAs are a practical, empowering way for indigenous owners to proactively assert their responsibility to protect the natural and cultural values of their country.  They are recognised by the Australian Government as an important part of the National Reserve System, protecting the nation’s biodiversity for the benefit of all Australians.

The Indigenous Rangers programme creates meaningful employment, training and career pathways for indigenous people in land and sea management. Its aim is to enable skilled indigenous people to combine traditional knowledge with conservation training to protect and actively manage their land, sea and culture, by being employed in real jobs with real wages.

The two programmes are administered by the Environment Branch of the Indigenous Employment and Recognition Division within the Indigenous Affairs Group of the Prime Minister and Cabinet. Their implementation is organized through indigenous communities, ranger groups, Land Councils, International Union for Conservation of Nature (IUCN), NGOs and scientific institutes.

Both programmes are deliberately light on provisions and regulations, to allow for each indigenous group to determine their own goals and methods, and to avoid the loss of trust that has plagued more prescriptive policies. Engagement by indigenous communities is voluntary and consensual.

IPAs represent a contract for the management of environmental and cultural values between Traditional Owners and the Federal Government (according to agreed criteria that satisfy IUCN requirements). They are voluntarily entered into by Traditional Owner groups and made operational after a management plan is developed by the indigenous partners following extensive consultation processes.

The Ranger Programme concept was designed to enlist and revive the skills of indigenous people and combine Western science with indigenous ecological knowledge. The success of the programme, especially compared to other indigenous employment schemes, is credited to the value assigned to indigenous knowledge and priorities, strong connection to land, flexible working arrangements that allow for family and cultural commitments, and the trust built through long-term funding arrangements.  Most Rangers work on a “no work no pay” basis.

IPA projects are supported through a multi-year funding agreement. IPAs also provide a framework to leverage partnerships with conservation and commercial organizations that provide employment, education and training opportunities for indigenous people. Many indigenous organizations now supplement government funding through fee-for-service or other income generating activities, as well as support from the private sector and philanthropic organizations. In 2015, 65 per cent of the total investment across IPAs and Ranger Programme came from the Government.

In Australia, there are 75 dedicated IPAs, covering 67,312,453 ha, making up 44.6 per cent of the National Reserve System. Several more IPAs are currently under consultation. In 2014, the Pintubi Traditional Owners declared 4.2 million ha of their land an IPA, under the Kiwirrkurra IPA, providing the final link in a corridor stretching from Western Australia to the Northern Territory and into the northern corner of South Australia, and creating the largest protected zone of arid land on Earth.

The Ranger Programme has grown to support 110 Ranger groups across Australia, employing over 2,600 Indigenous Rangers in full time, part time and seasonal work each year. Thirty-six per cent of Rangers are women. Support for Indigenous Ranger jobs is building a skilled workforce delivering lasting practical improvements to the environment.

The social impacts of the Ranger Programme have far exceeded expectations. Communities with active Ranger groups reporting positive health and education outcomes, and reduced rates of incarceration, alcoholism and other problems.  Being a Ranger or having a Ranger in the family is a source of income, stability and pride. Job retention rates are over 80 per cent, and special programmes are being developed to engage more women, youth and elders. Rangers receive training and many of them transition to other employment beyond the programme.  This is considered one of the Government’s most transformative indigenous programmes; it helps strengthen and pass on indigenous stories, languages, and values while supporting families and protecting country.

Environmental impacts stem from Ranger work in these fields:

The Indigenous Protected Areas (IPA) Programme and the Working on Country Indigenous Ranger Programme are highly transferable to other countries with land under indigenous stewardship. To date, the best case of transference is through exchanges with First Nations communities in Canada. Australian Rangers first visited Canada in 2012 to share their experiences with several indigenous groups. This helped inspire a movement to establish Indigenous “Guardians” in Canada, citing IPAs and Rangers as a model, and leading to the Assembly of First Nations passing a resolution in 2015 calling for a national Guardians programme. In March 2017, the Canadian Government announced the award of funding and support to set up the Guardian network.

Commonwealth of Australia (2016), Reporting back… 2014-15: How Indigenous Ranger and Indigenous Protected Areas programmes are working on country 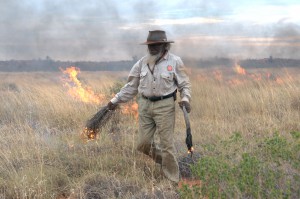 The Ranger Programme concept was designed to enlist and revive the skills of indigenous people and combine Western science with indigenous ecological knowledge. The success of the programme, especially compared to other indigenous employment schemes, is credited to the value assigned to indigenous knowledge and priorities.