The Cisterns Programme stems from a social movement in the Semiarid region of Brazil, where people were suffering acute water shortages due to successive droughts. The original concept was to install 1 million cisterns to provide drinking water in the dry season for millions of the poorest people in the region and allow them to co-exist with drought; this developed into the Cisterns Programme. Later the programme was expanded to include building cisterns to collect water for productive use, primarily for growing food, and for municipal schools. As an excellent model of large-scale mainstreaming of rainwater harvesting that has transformed the lives of millions of people, particularly women, Brazil’s policy was recognized with the Future Policy Silver Award 2017, awarded by the World Future Council in partnership with the UNCCD.

Stemming from a social movement in the Semiarid region, Brazil’s Cisterns Programme was introduced to support the goal of installing 1 million rainwater collection cisterns to provide drinking water in the dry season for millions of the poorest rural people in the Semiarid region of Brazil. These cisterns allow smallholder farmers and their families to become the protagonists of their own development and realise their right to water. Local people are trained in sustainable water management and ecological, locally-adapted farming techniques, and encouraged to store their resources – water, seeds, food, fodder – for use in periods of drought and hardship. When the Cisterns Programme became an official part of Brazil’s Zero Hunger programme, the collaborative grassroots implementation continued, now with support provided by the federal budget, representing a new, participatory, bottom-up way of delivering public policy in the country.

The Programme was enshrined into law in 2013. The goal of installing 1 million cisterns was achieved in 2014, and since surpassed, complemented by 250,000 productive water cisterns and thousands of cisterns built for schools. Since its introduction, this policy has transformed the lives of about 4.5 million people in the Semiarid, with a strong focus on empowering women and children. Due to the realization of its ambitious target, inclusive and participative nature, and potential role as a model for large-scale mainstreaming of rainwater harvesting to combat the misery caused by drought, Brazil’s Cisterns Programme is an excellent winner of the Future Policy Silver Award 2017.

The implementation of this policy is focused on the Semiarid region situated in the North East of Brazil. It is an area of high temperatures where rainfall patterns are irregular, with very long dry periods and rain concentrated in a few months of the year. This vast region covers 980,000 km², including nine states, with 1,134 municipalities and a population of 22 million people, of which the approximately 8 million living in rural areas are the main beneficiaries of this policy.

The Cisterns Programme originated in, and remains driven by, a genuine social movement in the Semiarid region of Brazil. When the programme was first developed, rural communities, primarily smallholder farmers, experienced extreme poverty and deprivation. During periods of drought, which could last several years, crops would fail, people would go hungry, and disease and child mortality would rise. During the severe drought in the 1980s, according to data from the state governments in the region, 100,000 people died in the space of five years. There were also high levels of migration to cities and other regions. In these dry periods, people were dependent on buying water from reserves collected on large properties, and instances of political corruption – “water for votes” – were common.

The plan to build 1 million cisterns in the Semiarid region was first articulated in 1999, in parallel to the 3rd Conference of the Parties of the UNCCD held in Recife, Brazil, when civil society organizations launched the Declaration of the Brazilian Semiarid Region that called for sustainable co-existence with drought, not simply relief from it. Work began through local civil society groups, churches and unions to develop and start implementing the 1 Million Cisterns Programme (P1MC), initially with support from international NGOs and donors. After the election of President Lula in 2003, the Cisterns Programme was adopted by the Federal Government and it became a key component of Brazil’s new Zero Hunger (Fome Zero) strategy. The 2013 Law No. 12,873 on the National Programme to Support Rainwater Harvesting and Other Social Technologies for Access to Water formalized the programme, and facilitated and streamlined its delivery. This accelerated the building of cisterns, and made their provision more universal and organised, but the essential concept remained unchanged.

The Cisterns Programme is based on the goal of enabling people to live with dignity in the Semiarid and to learn to coexist with drought instead of seeking emergency relief. It aims to promote access to water for human and animal consumption and food production through simple technologies and training. This advances the decentralisation and democratisation of water provision and food production, giving greater sovereignty, security and resilience to the people of the Semiarid. Reducing the huge burden on women and children, who are responsible for the water collection – which without a cistern can take several hours every day – is a particular goal. The objective is for smallholder farmers and their families to become the protagonists of their own sustainable development and community well-being by enabling ecological farming suited to the local conditions.

During the first ten years of the Cisterns Programme there was no specific legislation behind it. The programme was implemented through partnership agreements with Articulação Semiárido Brasileiro (ASA), a network of over 3,000 civil society organizations, the state and the municipal governments, and other actors, and was supported through the federal budget. To legally support the actions of ASA, in 2002 the Association Programme One Million Cisterns (AP1MC) was established as a Civil Society Organization of Public Interest with the Ministry of Finance.

The 2013 Law, enacted during the Rousseff Presidency, was designed to facilitate and streamline processes, as well as to formalise the programme. The construction of cisterns accelerated during this period; in 2014 alone, the programme built just over 360,000 cisterns, 300,000 of which for human consumption and 60,000 for production.

All four components follow the same principles of local ownership and decision-making, using local materials and labour for construction, and integrating training into the programme.

1.2 million cisterns were built between 2003 and 2016; the 1 million goal was reached in 2014. This has benefited 4.5 million people in the Semiarid region. The 16,000 litre “first water” cisterns can supply a family of five with water for drinking, cooking and washing during a dry period of eight months, or even longer. 200,000 “2nd water” tanks have also been built. These 52,000 litre cisterns have helped families advance from subsistence farming to producing a more diverse range of products to supplement their diets and income. In addition, almost 5,000 cisterns have been built to provide water for rural schools. Thanks to the cisterns, far fewer people leave the region during drought. Since 2012, the region has been experiencing one of the worst droughts ever recorded. The situation is difficult, but without the very worst effects of drought – child mortality, starvation, mass migration. The policy enables people to coexist with drought and keeps them on their land. Prior to this, small farmers were often forced to abandon their land, leaving it either barren and degraded, or to be taken-over by big landowners and turned into large plantations, a situation far worse for land, biodiversity and communities.

People are learning how to farm sustainably on their small plots, through the revival of traditional methods and native species. Saving and storing water means there is less or no need to use fertilisers. They are also learning to conserve the Caatinga (surrounding forests and brush-land) and plant trees, cassava, cactus and other resilient indigenous vegetation. The farms are reported to be like thousands of oases in the Semiarid and the landscape is far greener than 20 years ago.

For women, the policy is transformational. Cisterns are registered in the name of the female head of the household, giving them ownership, status and responsibility. Water collection at the home means no more walking for miles to fetch water. Children can go to school and women’s time is free for other activities: community engagement, learning new skills, and growing food – including vegetables, native and medicinal plants, and keeping chickens and goats. This gives women greater independence and income, and boosts food security for their families.

Rainwater harvesting is practiced across the world. What sets this policy apart is the huge scale of its implementation and impact, that it began at grassroots level and that, despite its enormous scale, it has remained community driven. This is a model that could be emulated in other regions where rural farmers suffer due to drought and irregular rainfall. Mainstreaming community rainwater harvesting could transform lives, provide food security, and reduce rural to urban migration in other parts of South America, Africa and Asia. This policy has been widely studied and presented around the world as a positive model for combating desertification and drought. ASA has travelled to several countries to share the experience of the Cisterns Programme including Haiti, Bolivia, Argentina and Senegal. The UN FAO recently held a workshop to examine the potential for developing similar programmes in Africa.

Ministry of the Environment and Ministry of Social Development and Fight against Hunger (2015), The right to water in the semi-arid region: managing Brazilian areas susceptible to desertification in UNCCD, Living Land 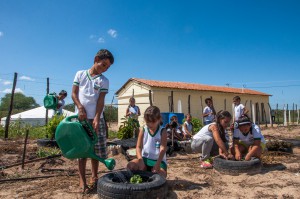 With a strong focus on empowering women and children, Brazil's Cistern Programme has made the right to water a reality for millions, while also eradicating poverty, ensuring food security, diversifying incomes and increasing climate resilience.