Ethiopia’s Tigray region has made significant progress in restoring its degraded lands and improving its food and water security. The impressive results derived from the major land restoration undertaken by local communities and the regional government.

Key to this success is Tigray’s regional development strategy, known as Conservation-Based Agricultural Development-Led Industrialization, which focuses on food self-sufficiency and economic growth by conserving land and promoting sustainable agriculture. Thanks to a unique combination of collective action, voluntary labour and the involvement of young people, the people of Tigray are restoring land on a massive scale. F

Another important point is the Productive Safety Net with paid work (FFW) as well the interventions of NGOs and parastatals (paid work).[1]

For its remarkable achievements under harsh conditions, Tigray’s policy was recognized with the Future Policy Gold Award 2017, awarded by the World Future Council in partnership with the UNCCD.

Youth unemployment is a growing challenge in developing countries.[2] Ethiopia has spearheaded a new approach to youth employment by allocating rehabilitated communal lands to unemployed, land-poor and landless youth.[3] The youth organize themselves in business groups formalized as primary cooperatives based on cooperative law. They are allowed to establish a sustainable business on the allocated land. They elect a board, make their own bylaw, and prepare a business plan that has to be accepted by the local administration. They typically invest in activities such as forestry, apiculture, livestock rearing, horticulture and irrigation. It takes time for these joint activities to start to yield sizable incomes to be shared by group members. They therefore depend on complementary sources of income.[4]The fact that land cannot be purchased or sold in Ethiopia limits the potential for the “agricultural ladder” to be a pathway out of poverty for the poor through first renting and then purchasing land. However, in 2019 land renting is the most important source of income for 16% of the youth and the second most important source of income for 20%, respectively. It was mostly male youth, who own oxen, that were able to rent land.[5] In the future, the majority of the youth expected their joint business activity to become their primary source of income and land renting was expected to become less important. We may therefore conclude that land renting was perceived as a temporary solution during the period they are building their joint business.[6]

Tigray was one of Ethiopia’s regions most affected by recurrent drought and food security problems.

Degraded land has been restored in Tigray on a massive scale, and the resulting change is well-documented, most recently by Etefa Guyassa and Gebremdhin Gebremeskel. Impacts are evidenced and quantified for example by a study which compares the current landscape with 30-year-old photographs, substantiated by field investigations. For its remarkable achievements in participatory land restoration, Tigray’s policy won the Future Policy Gold Award 2017.

Since the policy’s introduction, resolute efforts to remedy the degradation of natural resources have been under way, by the regional government and the people at large to restore and conserve natural resources in the region. Measures include construction of stone terraces, soil bunds, and micro-dams, establishment and development of exclosures and community woodlots, enforcement of use rules, regulations for grazing lands, reduced burning and application of manure and compost.

The implementation in Tigray is particularly successful due to Mass Mobilization Campaigns that promote the use of voluntary labour to create productive assets, and a Youth Responsive Land Policy that provides access to land for landless youth.

[1] All technical leaders are men. Building works are done by men.

Situated in northern Ethiopia, Tigray state is home to over 4.3 million people. Tigray’s severe land degradation comprised of soil erosion, deforestation, declining biodiversity resources and soil moisture stress, which is attributed to the heavy population concentration in the highlands. People strived to increase food production with subsistence farming using unsuitable agricultural techniques, and by expanding farming on marginal land. Soil fertility was depleted, resulting in a decline in agricultural productivity.  The 1984-1985 famine triggered the start of the downfall of the Derg (Territorial Army that ruled Ethiopia) and its replacement by the current Government in 1991. The establishment of the Federal Democratic Republic of Ethiopia in 1991 led to a country-wide process of decentralisation in which political, fiscal and administrative powers were reallocated to each of the country’s nine regions and urban administrations.

The development strategy of the Ethiopian Government is called Agricultural Development-Led Industrialization (ADLI). The focus of ADLI is not the same in all states. The Tigray region’s Conservation-Based Agricultural Development-Led Industrialization focuses on the conservation of natural resources and emphasises people’s participation as the underlying principles for agricultural development. The strong organisation of the local people of Tigray proved instrumental for the implementation of landscape-scale restoration and, specifically, Mass Mobilization Campaigns. The Ministry of Agriculture and other stakeholders are promoting bottom-up, participatory, community-based land restoration efforts.

Specific policy measures of Tigray’s ADLI to improve agricultural productivity and promote food security include: agricultural extension, training and research; agricultural export promotion; Food Security Programme, productive Safety Net Programme, voluntary Resettlement Programme. To make farmers acquire competencies in production and marketing, ADLI increased the number and education level of Development Agents through providing extensive technical, vocational education and training in agriculture and established Farmers Training Centres to transfer improved agricultural technologies and give adequate services at a closer reach. In particular, the deployment of extension workers to every small rural administrative unit in Ethiopia facilitates sustained knowledge and skills transfer to smallholder farmers and thus the uptake of sustainable agricultural practices such as the construction of stone terraces and micro-dams, establishment of enclosures and community woodlots, regulation of grazing lands, reduced burning and the application of manure and compost, contributing to food self-sufficiency and economic growth.

The implementation of Tigray’s ADLI has been considerably enhanced by:

Tigray’s Mass Mobilization Campaigns (1991) are considered a unique collective action strategy. Villagers in Tigray are expected to voluntarily contribute their labour of 20 days per year to building public and productive assets, such as construction of terraces on steep slopes and the improvement of rural roads, construction of public infrastructure, and irrigation projects – which they have done for the past three decades. The community was organized into development groups and men, women, and youth associations. During communal work, the group and community leaders organise people and tasks, and ensure that the work is carried out. In an International Food Policy Research Institute (IFPRI) study, farmers stated that their motivation for participating were “livelihood improvements, increase in food crop production, and increase in groundwater availability. The study points out that it is remarkable that the perception of land degradation and awareness of the problem have also played an enormous role in their willingness to contribute labour for ecological conservation”.

In Ethiopia, land is owned by the state, and the “land as a safety net” right is the basis for the prohibition of land sales. Ethiopia’s constitution formally guarantees young people’s rights to rural land if they wish to establish a livelihood in agriculture. However, the practical applicability of this right depends on the availability of local land, inheritance customs, and local administrative processes. In a country where almost six out of ten farm households cultivate less than one hectare of land, the growing youth population in rural areas poses a challenge in terms of ensuring their access to land and to a livelihood. The mechanism of the Youth Responsive Land Policy (2008) is to give legal landholding certificates and extension support to landless young people. In exchange, they restore degraded communal lands. Youth groups form local cooperative organizations based on cooperative law and develop their own bylaws. They elect a board, require a business plan, and are subjected to regular auditing. The Youth Responsive Land Policy has been implemented in a number of regions in Ethiopia and is a tool for the Sustainable Land Management Project of the World Bank.

Implementation of these policies was supported by a range of internationally funded programmes. The policies created a favourable policy environment for these programmes and have catalysed significant investments, including the FAO-Managing Environmental Resources to Enable Transition (MERET) project, the multi-donor funded Productive Safety Net Programme, and the Sustainable Land Management Programme.

Landscapes have been restored in Tigray on a massive scale and the change is well documented. The transformation has occurred under very harsh conditions. The systematic management of mountains and hillside with stone walls and pits helped recharge groundwater levels. The area under irrigation increased from 5,000 ha in 2000 to 30,000 ha in 2008 and continues to expand. Since 1991, soil and water conservation activities have been undertaken on 960,000 ha and 1.2 million ha have been closed off to allow vegetation to re-establish.

Haregeweyn et al (2012), assessing specifically integrated watershed management, found that erosion has decreased significantly. The decrease in sheet and rill erosion resulted from changes in crop cover (48 per cent) and conservation-practice (29 per cent), and the results show that land degradation has been curbed thanks to these interventions. The authors point out that a key success factor was the implementation approach, including the participation of the local community in the form of their contribution of 20 days of free labour.

Most impressively, impacts are quantified by a study which compares the current landscape with 30-year-old photographs, substantiated by field investigations.  The study illustrates that even though the population of Tigray has increased, sheet and rill erosion rates have decreased, infiltration and spring discharge are enhanced, and vegetation cover and crop production have improved. The rehabilitation is due both to improved vegetation cover and to the implementation of physical conservation structures.

The authors state that these changes are not climate-driven but the result of human intervention: “In Tigray, environmental rehabilitation is at the top of the agenda of the regional government.”  The focus is on landscape management principles that emphasize community groups and multi-stakeholder participation, with a focus on watersheds.

By December 2016, as a result of the Youth Responsive Land Policy, across all participating regions of Ethiopia over 740 youth groups with more than 15,000 members, of which 40 per cent are women, had organized tenure rights to over 2,850 hectares, receiving group landholding certificate or other legal documentation.

The World Bank, which has been involved in the project, points out that the project “is reducing youth unemployment, and incentivizing good land stewardship among the next generation of community leaders, while boosting the climate resilience and carbon storage potential of production landscapes by bringing land back into production”.

A research team from the Norwegian University of Life Sciences that covered the policy concluded that there is a high degree of compliance with Elinor Ostrom’s Design Principles across the youth groups, and that the youth group model shows promise as an approach for engaging landless and unemployed youth in productive activities and as environmental custodians. Ultimately, they recommend that it be tested in other countries.

Tigray’s approach provides an integrated landscape management model for the restoration of sub-Saharan African drylands. Its evolution from top-down, centralised programmes to more bottom-up, decentralised, and participatory programmes shows how a stepwise or sequential series of steps can help garner local and international support and scale up sustainable land management interventions. The effective mobilisation of local farmers was a key success factor and is a cost-effective way to enhance welfare and sustainable land management. 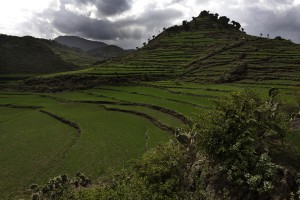 Thanks to Tigray's Conservation-Based Agricultural Development-Led Industrialization (ADLI), despite the increase in the population of Tigray, sheet and rill erosion rates have decreased, infiltration and spring discharge are enhanced and vegetation cover and crop production have improved.