The Updated Rangeland Strategy for Jordan (2013/2014) has a strong focus on participation, already realised during the design phase. It fosters involvement of local communities in land management, enhances their roles and responsibilities and empowers local governance mechanisms.

The strategy has been implemented and first results can be seen in promising pilot projects. However, the political situation in the region has put strong pressure on the government to focus budget on social, migration-related issues, since Jordan is host to some of the greatest numbers of refugees, with an estimated 2.7 million people.

Rangelands are a defining ecosystem for Jordan and take up the vast majority of Jordan’s land area. At the same time, as Jordan is highly urbanised, the rangelands have a small population of around 185,000 people living in 170 communities, which is roughly 2.5% of Jordan’s population.

Overgrazing and inadequate cultivation patterns have led to a reduction of vegetation cover in Jordan’s rangelands, an increase in soil erosion, loss of soil fertility, the loss of rain water through runoff, a higher frequency of wind storms and a reduction in biodiversity.

Traditionally, Jordan’s Bedouins effectively governed their rangelands through traditional land tenure systems and grazing rights known as “Hima”. Nomadic Bedouins raised their livestock with no regard to political borders, which was also very beneficial to the land. The declaration of grazing lands as state-owned land in Jordan discouraged pastoralists and Bedouins to conserve their resources.

The five main goals of the Updated Rangeland Strategy are:

The Rangeland Strategy of 2013 has updated the Strategy that dates from 2001. To update the strategy, the Ministry of Agriculture cooperated with the International Union for Conservation of Nature, in particular, its Regional Office for West Asia, and consulted with relevant stakeholders. A national workshop held in Amman in June 2013 resulted in the final version of the strategy.

The implementing ministry of the Updated Rangeland Strategy is Jordan’s Ministry of Agriculture (MOA), in particular, the Directorate of Rangelands and Badia Development. MOA involves local land-users through multi-stakeholder consultation and in implementation, whilst it involves research organisations in pilot and research projects.

The Strategy lists a range of programmes and projects, which are aligned to the goals. They include:

After one year of activities in the Bani Hashem community in central Jordan, biodiversity benefits have already been observed.  Indigenous floral species are back, shrubs and grasses are regenerating. A total of 36 native plant species were recorded on the site, mainly in the area that receives the highest rainfall.

Furthermore, tribal conflicts over natural resources are reduced with the Hima system. The approach builds on the capacity of the local community and increases the involvement of different groups, including women. They play a major role in improving their livelihoods through securing their access and management rights and building relationships with government institutions.

However, nationwide results of the Updated Rangeland Strategy cannot be observed yet, since due to the political situation in the region, the government has dedicated the budget to security and social issues. The strategy serves as a roadmap. NGOs and government are using it as guidelines for their work.

The policy can be transferred and applied in other countries of the Middle East and in many regions worldwide with similar environmental conditions; it is already informing a regional rangeland restoration partnership with the League of Arab States and the government of Egypt. 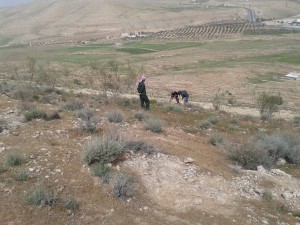 After one year of activities in the Bani Hashem community in central Jordan, biodiversity benefits have already been observed.  Indigenous floral species are back, shrubs and grasses are regenerating. A total of 36 native plant species were recorded in the site, mainly in the area that receives the highest rainfall.