Niger’s 3N Initiative ‘Nigeriens Nourishing Nigeriens’ of 2012 stems from a strong political will to combat hunger and poverty. It is a large-scale, cross-sectoral initiative that increases livestock, agricultural and forest productivity, while augmenting the resilience of farmers and herders climate change and food insecurity. Thanks to the initiative, Niger has made significant progress in its fight against land degradation and hunger reduced the proportion of people suffering from hunger by 50 per cent since 2011. For its inclusive and participatory design and implementation, as well as its significant achievements, the 3N Initiative was recognized with the Future Policy Bronze Award 2017, awarded by the World Future Council in partnership with the UNCCD.

Framework law on Environmental Impact Assessments: art. 3 of Decree N°2000-369/PRN of the Ministry of Environment and the Fight against Desertification (in French)

The 3N Initiative is the Government’s first centralised initiative to combat hunger and land degradation. Developed in an inclusive and participatory process, the 3N Initiative is a large-scale and cross-sectoral policy for sustainable agricultural development, which aims at increasing livestock, agricultural and forest productivity and enhancing the socio-economic resilience of farmers and herders.

Thanks to the initiative, Niger has made significant progress in combating land degradation and in reducing hunger. By 2015, the initiative had, for example, restored 218,219 ha of degraded land, which is83 per cent of the 260,000 ha target set by the first five-year plan. To increase the resilience of vulnerable communities, it set up numerous integrated service platforms to support farmers and herders, spread irrigation systems and distributed 120 000 small cattle. As a result, the proportion of people suffering from hunger was reduced by 50 per cent since 2011. Due to its ambition, inclusiveness and encouraging results, the 3N Initiative received Future Policy Bronze Award 2017.

Niger is one of the world’s poorest countries.  Food insecurity in this landlocked West African state is a chronic issue, affecting 20 to 30 per cent of the population. Rural areas are particularly impacted and prone to poverty. Factors such as biannual droughts, floods, demographic growth, shrinking rangelands, locust infestations and refugee flows undermine the resilience of local communities and accelerate desertification and soil erosion, which altogether have led to repeated food crises. In the past, the Nigerien government responded to the latter by importing cereals and food products from neighbouring countries.

The 3N Initiative was launched in response to the last food crisis of 2011 and 2012. It was designed by the High Commission for the 3N Initiative (Haut-Commissariat à l’Initiative 3N), which operates under the direct supervision of the President’s cabinet. . The Initiative was intended as participative and inclusive; various stakeholders were consulted and involved in the implementation. It was officially heralded by the government with the Decree 2012-139/PRN of 18th April 2012.

The priority objective of the 3N Initiative is for ‘drought to no longer mean famine’ and to reduce poverty by improving the resilience of rural communities to climate change and food insecurity. It further aims to fight malnutrition, which threatens vulnerable people in rural areas, especially women and children. By tackling the root causes of those problems, the Initiative aims for social justice.

The 3N Initiative contributes to Niger’s commitment to combat desertification under the African Initiative for Landscape Restoration, and under the Bonn Challenge (AFR100 for Africa). In that framework, the country aims to restore up to 230 000 ha/year of degraded land to reach the objective of 3.2 million ha of recovered land by 2030.

The expected outcome was to increase livestock, agricultural and forest productivity, for instance. up to 5 million tonnes of cereals improving the productions of milk, meat, fish, and fruits. Moreover, the aim was to enhance the socio-economic resilience of the revenues of farmers.

The policy focuses on soil fertility by reclaiming degraded lands and enhancing sustainable agricultural practices. The Zaï technique is used, for example, in which pits are created to collect water and nutrients from compost. The policy supports sustainable irrigation systems using water resources and rainwater, erosion control measures, afforestation, stable income generation and livelihood of rural populations, as well as social integration of vulnerable groups, including women. The initiative has also provided transitional measures, such as financial and food assistance, to retain vulnerable groups in rural territories and to help them develop profitable farming.

The Initiative is science-based. Research institutes and universities were involved in its implementation to assist the different regions in defining solutions adapted to their challenges and needs and to provide preliminary environmental and social impact assessments. Regional authorities and local communities were empowered to conduct information campaigns and to provide training to the populations at regional and local levels, aiming to educate people about sustainable natural resources management and implementing afforestation projects to protect the soils, while providing food resources. Agricultural cooperatives organised local practices and responses, whilst civil society and NGOs were involved in the implementation of the policy as well. The policy established a network of platforms for dialogue at regional and local levels for diffusing information and trainings, and for reporting on implementation.

As it was designed in an inclusive and participatory process, all sectors and stakeholders are included. For instance, gender inequality is addressed with specific measures aiming at women, such as micro-financing and small cattle distribution and various types of law, such as animist or Islamic, are taken into account in appeal processes.

By 2015, the Initiative had restored 218,219 ha of degraded land (83 per cent of the 260,000 ha target set by the first five-year plan), fixed 33,839 ha of dunes to protect infrastructure (52 per cent of the target), and installed 88,656 km of firebreaks. While not reaching all its ambitious targets, the Initiative produced further impressive outputs, including distributing food (236,728 tonnes distributed for free in 2011-2012, nearly double the 121,000 tonne target), moderating prices (324,706 tonnes of low-price food sold in 2011-2015), setting up numerous integrated service platforms to support farmers and herders (stocks, training centres, microfinance, radios, tractors, seeds, vaccination, wells), establishing irrigation systems on 111,353 ha in 2015 (89 per cent of the 125,000 ha target), advancing healthy crop growth with reduced use of harmful pesticides, rehabilitating market gardening sites, increasing livestock through better availability and nutritional quality of feed materials, vaccinating 8 224 967 animals, distributing 120 000 small cattle amongst vulnerable groups of 5 sensitive regions, developing cross-border transhumance corridors, spreading afforestation and fruit tree planting, removing sand from the Niger river, increasing the number of rangelands, increasing the number of ponds in rangelands, and increasing fish stocks in 112 ponds, amongst others.

Thanks to the 3N Initiative, Niger has made significant progress in its fight against land degradation and hunger, reducing the proportion of people suffering from hunger by 50 per cent since 2011.

The 3N Initiative could inspire a common vision of nutrition and food security in the Sahel region. The cross-sectoral approach – integrating agriculture, livestock, trade, nutrition, gender and social inclusion – could apply to other countries facing similar challenges. Comparable approaches have been adopted in Burkina Faso, Guinea and Senegal. 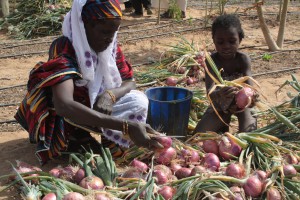 The 3N Initiative focuses on sustainable agricultural practices, irrigation and erosion control measures, afforestation, and income generation, as well as social integration of the most vulnerable in society, including women. Gender inequality is addressed with specific measures such as micro-financing and small cattle distribution.