In 2004, the ‘Norwegian Government Pension Fund – Global’ adopted guidelines to ensure that the fund does not make investments which may contribute to unethical acts, or omissions, such as violations of fundamental humanitarian principles, serious violations of human rights, gross corruption or severe environmental damages.

Although other countries had adopted similar divestment policies, Norway’s scheme  is highlighted in particular for extending divestment to companies involved in “the development and production of key components for nuclear weapons.”

Guidelines for the observation and exclusion of companies from the Government Pension Fund Global’s investment universe, 2004. [English]

The Ethical Guidelines deal with a variety of “unethical conduct,” but it is the divestment from a particular group of weapons of mass destruction which makes this an interconnected exemplary policy in nuclear disarmament too. Until 2015, the policy had been critiqued for a failure to divest from fossil-fuel interests, the same interests upon which the fund had made its wealth. This changed however, with the announcement that the Government Pension Fund – Global had divested from a number of coal-based companies, becoming one of the most high profile institutions to have done so to date.

The potential effects of using ethical guidelines for investment, and divestment, policies should not be underestimated. Divestment is a powerful tool to disarmament initiatives, and critical to de-legitimising certain types of weapons, as well as encouraging a transition to 100% renewable energy.

Divestment schemes are relatively easily transferable, and can multiply the financial and normative impact of such schemes, building pressure on systems invested in maintaining the status quo, i.e. the military-industrial complex and the carbon-based economy.

The Norwegian Government Pension Fund Global (formerly known as the Government Petroleum Fund) is the world’s largest sovereign wealth fund and the repository of the Norwegian peoples’ excess oil and natural gas wealth.

After a sharp increase in the Fund’s value throughout the 1990’s, a public debate began to take place as to whether its investment and management should be governed by ethical principles. In 1999, it was brought to light that the Fund had invested in a Singaporean company (Singapore Technologies Engineering) which manufactured anti-personnel mines – in spite of Norway’s role as a key player in achieving, and party to, the 1997 Mine Ban Convention, prohibiting the use, development, stockpiling, production and transfer of anti-personnel mines.

At the core of the Ethical Guidelines lies the belief that investments which carry an unacceptable risk of contributing to unethical acts or omissions, such as violations of fundamental humanitarian principles, serious violations of human rights, gross corruption or severe environmental damages, should not be made. The criteria set out in the Guidelines prohibit investment in companies which either by themselves, or through entities which they control, produce weapons which violate fundamental humanitarian principles in normal use, produce tobacco or sell weapons or military material to Myanmar.

Although other countries have adopted similar divestment policies, at the time Norway’s scheme was unique in that it included divestment from companies involved in “the development and production of key components for nuclear weapons”, based on the provision that the Fund shall not invest in companies that produce weapons that “violate fundamental humanitarian principles through their normal use.”

The Graver Committee and the Norwegian Stortinget considered that nuclear weapons and cluster munitions, though not indisputably prohibited under international law, might be considered to violate fundamental humanitarian principles, and should thus also fall under the Fund’s divestment scope. The exhaustive list of weapons that were considered to violate humanitarian principles includes: chemical and biological weapons, blinding laser weapons, munitions with fragments not detectable by X-ray, incendiary weapons as referred to in the UN Conventional Weapons Convention, anti-personnel mines, cluster weapons and nuclear weapons.

In addition, the principle that the Fund should not invest in companies that “develop and produce key components for nuclear weapons” has been interpreted by the Council as encompassing more than just the actual production of nuclear warheads. The exclusion criterion also covers delivery mechanisms, such as missiles carrying the warhead (ICBM), and certain forms of testing as well as maintenance of nuclear weapons.

More recently, international attention has been drawn to whether the fund should divest from fossil fuel interests and become the most high profile institution to have done so to date. It would be a particularly symbolic decision given the origins of the Fund’s wealth in the first place. In March 2014, the Norwegian Ministry of Finance commissioned a report from an expert group as to whether the ‘Norwegian Government Pension Fund Global‘  should divest from fossil fuel companies. By the end of the year however, it was concluded that the fund should not be used as a climate policy instrument.

Nonetheless, fears of stranded assets with regards to coal and gold mine investments, brought an announcement just a few months later in February 2015 that the Fund had divested from a number of such companies after concerns about the future viability of their business models. Then, in May 2015, there was a unanimous recommendation by the Finance Committee of the Parliament of Norway to divest from coal – a decision endorsed by the Norwegian Parliament the month after and resulting in the exclusion of up to $10bn of coal-related investments from the fund.

Section 2. Exclusion of companies from the Fund’s investment universe

(1) The assets in the Fund shall not be invested in companies which themselves or through entities they control:

a) produce weapons that violate fundamental humanitarian principles through their normal use;

c) sell weapons or military material to states that are affected by investment restrictions on government bonds as described in the management mandate for the Government Pension Fund Global Section 3-1 C).

The Ministry of Finance makes the final decision regarding exclusion of companies according to these criteria, based on the recommendation from the Council on Ethics (Section 2.2). All of the Council’s recommendations –regardless of whether the Ministry follows their advice – must be published (Section 5.7).

Ethical investment is carried out in 3 ways:

(1) The Norwegian Bank Investment Management (NBIM) manages the fund on behalf of Norges Bank (the Norwegian Central Bank) and by exercising its ownership rights and voting power aims to strengthen corporate governance. The aim is to influence companies’ behaviour by engaging in a dialogue with them. This is all done confidentially.

(2) Negative screening – selling the shares in companies that produce weapons which may violate humanitarian principles. The focus here is on the products the company makes, not on how the company is run.

(3) Exclusion of companies where there may be a risk of contributing to serious or systematic human rights violations, severe environmental degradation, gross corruption, or other particularly serious violations of fundamental ethical norms.

The Ministry of Finance publishes a list of companies that have been excluded from the Fund or put under observation (Section 8).

Norway is seen as the global leader when it comes to ethical investment and the global investment community follows its decisions closely.  As the Fund is so large, being excluded has an actual financial impact on the company concerned. The financial implications are compounded by the fact that many smaller funds – both in Norway and abroad – which don’t have ethical guidelines or a council on ethics, follow the exclusion decisions of the Fund.

Other countries have initiated legislation to ensure divestment from companies involved in the manufacture of cluster munitions and landmines (Belgium, Ireland, Italy, Luxemburg and New Zealand). However, Norway’s scheme at the time was unique, due to its inclusion of divestment from companies involved in “the development and production of key components for nuclear weapons” (Report of the Graver Committee, November 2003).

Section 2.1 of the Guidelines states that the Fund shall not be invested in companies that produce weapons that “violate fundamental humanitarian principles through their normal use.” As Norway was a State Party to the conventions banning chemical weapons, biological weapons and anti-personnel mines, it was a relatively straightforward assumption by both the Advisory Commission on International Law and the Graver Committee to ban the Fund’s investment in companies that produce these types of weapons.

However, the Graver Committee, supported by the Parliament, considered that nuclear weapons and cluster munitions, though not clearly prohibited under international law (at the time, the Convention on Cluster Munitions had not yet been adopted), might be considered to violate fundamental humanitarian principles, and should thus also fall under the Fund’s divestment scope.

However, the Ethical Guidelines and the Fund are not free of criticism and controversy. Although the divestment scheme, as it relates to weapons manufacturers is considered ‘best in class,’ the application of the Ethical Guidelines fails to take into account other important issues, such as biodiversity, energy security, and climate change, and continues to invest in fossil fuels.

There is an ongoing public debate in Norway about how the Fund and (application of) the Ethical Guidelines could be improved and calls for exclusion of specific companies are quite common. Moreover, the fact that the source of income for the Fund is Norway’s ever-growing oil industry (the world’s third largest oil exporter) is seen by some as a problem – especially by those calling for a new Climate/Energy policy. The Fund aims to be to the benefit of future generations, and the Ethical Guidelines are meant to ensure investment takes a long-term view, so to simultaneously contribute on such a large scale to fossil fuel-reliance is certainly seen as a contradiction in terms. This may be changing though as fossil fuel-based models are becoming viewed as financially unstable, with  the Fund recently divesting from coal and gold mining assets.

The Ethical Guidelines for the Norwegian Government Pension Fund Global  can be fairly easily replicated in so far as they relate to divestment from certain weapons manufacturers, i.e. companies that produce weapons that “violate fundamental humanitarian principles through their normal use.” The establishment of a Council on Ethics, with its transparent working methods, is another key aspect to implementation.

Other countries have already followed the Norwegian model, confirming its potential for transferability. In New Zealand, a coalition of members of parliament and NGOs approached the Government Superannuation Fund and requested that it follow the Norwegian example. The Fund has since adopted guidelines which include divestment from corporations involved in the testing or manufacture of nuclear weapons.

Recently, Switzerland made it clear that investing in companies producing nuclear weapons is prohibited by the Swiss Federal Act on War Material (which also covers biological and chemical weapons, cluster munitions and landmines), enacted in February 2013.

Meanwhile, other major financial institutions in Scandinavia are also considering divestment from fossil fuel stocks. Denmark’s largest pension fund, PFA, excludes tar sands companies while six funds are now being asked to dump coal investments by 2018 and exclude other high-risk oil and gas projects. In addition, the city of Oslo became the first capital to divest from fossil fuels in early March 2015 following the example of other cities worldwide such as Boxtel in the Netherlands, Dunedin in New Zealand and Oxford in the UK. 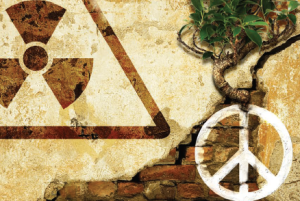 Divestment has proven to be an effective tool to build a prohibition norm against certain types of weapons. The 2013 Future Policy Award honoured Belgium’s laws banning landmines (1995) and cluster munitions (2006), as they were the first de jure categorical bans on such indiscriminate weapons. In 2007, Belgium became the first country to ban investment in cluster munitions producers—a policy that has been replicated by many since.