Treaty of Tlatelolco: Nuclear-Weapon-Free Zone for Latin America and the Caribbean

Treaty of Tlatelolco: Nuclear-Weapon-Free Zone for Latin America and the Caribbean

The nuclear arms race and the 1962 Cuban Missile Crisis inspired Latin American governments to begin a process which would ensure that the region would never again become the scene of a nuclear conflict. These efforts culminated in the Treaty for the Prohibition of Nuclear Weapons in Latin America and the Caribbean (also known as the Treaty of Tlatelolco), which established the first Nuclear-Weapon-Free Zone (NWFZ) in a highly  populated area. The Treaty has been critical to advancing regional peace and security as well as creating a  precedent and inspiration for subsequent NWFZs and giving impetus to the universal elimination of nuclear weapons

In 2013, the Treaty of Tlatelolco received the top prize of the World Future Council’s annual Future Policy Award, which was held on the theme of disarmament, in partnership with the UN Office for Disarmament Affairs and the Inter-Parliamentary Union.

The Tlatelolco Treaty provides the Latin American and Caribbean States with the legitimacy to continue to promote their ultimate goal and one of today’s main global challenges, the achievement of universal nuclear disarmament.

Gioconda Úbeda Rivera, former Secretary-General of the Agency for the Prohibition of Nuclear Weapons in Latin America and the Caribbean (OPANAL) and Deputy Minister of Foreign Affairs of Costa Rica

Treaty for the Prohibition of Nuclear Weapons in Latin America and the Caribbean (Treaty of Tlatelolco), 1967. [English]

Additional Protocol 1 binds overseas countries with territories in the region to the terms of the treaty. [English]

Selection as a Future-Just Policy
After the Cuban Missile Crisis brought a nuclear conflict to the doorstep of Latin America, the Treaty of Tlatelolco was designed to improve the security of current and future generations from the devastating and potentially irreversible consequences of a nuclear conflict in the region.

It is far-sighted treaty which has prevented the ‘horizontal spread’ of nuclear weapons in the region as some of the larger states began to develop nuclear energy industries, which could have provided capacity for the future development of nuclear weapons.

The treaty’s multilateral framework and confidence-building measures have contributed to the emergence of a consensus favouring non-proliferation and peaceful conflict resolution principles in the region.

Context
Initial efforts to create an area free of nuclear weapons began in the late 1950s with several proposals to establish such a zone in Central and Eastern Europe. Poland offered the first proposal – named the Rapacki Plan after the Polish foreign minister – in 1958. The Soviet Union, Sweden, Finland, Romania, and Bulgaria also floated similar proposals. All these early efforts, however, floundered amidst the US-Soviet superpower conflict.

In the same year, Costa Rica was the first in the region to (unsuccessfully) propose a Latin American nuclear arms control arrangement during a meeting of the OAS Council. In 1960, French nuclear weapon testing in the Sahara, together with the South African apartheid regime’s interest in nuclear arms, led African states to issue a call for a NWFZ, as endorsed by the UN General Assembly the year after. Alone amongst Latin American states, Brazil supported the African NWFZ resolution and proposed a similar zone within its own region.

By 1962, the growing nuclear arms race that had begun at the end of World War II, together with the nuclear stand-off between the United States and the Soviet Union, came to a head with the Cuban Missile Crisis.  Latin-American governments pushed themselves to ensure that the region would never again become the setting for nuclear conflict.

In 1963, the efforts of Alfonso Garcia Robles, the Mexican ambassador to Brazil, eventually led to Bolivia, Brazil, Chile, and Ecuador joining Mexico in supporting a Latin American NWFZ. The Treaty of Tlatelolco was carefully negotiated in Mexico City between 1964 and 1967, and Alfonso García Robles ultimately received the Nobel Peace Prize for his efforts in this process.

(a) the testing, use, manufacture, production, or acquisition by any means whatsoever of any nuclear weapons, by the Parties themselves, directly or indirectly, on behalf of anyone else, or in any other way; and

(b) the receipt, storage, installation, deployment, and any form of possession of any nuclear weapons, directly or indirectly, by the Parties themselves, by anyone on their behalf, or in any other way. The Parties also undertake to refrain from engaging in encouraging or authorizing, directly or indirectly, or in any way participating in the testing, use, manufacture, production, possession, or control of any nuclear weapons.

Additional Protocol 1 binds overseas states with territories in the region, while Additional Protocol II requires nuclear weapon non-use and non-threat of use from the five official nuclear-weapon-states (US, UK, France, Russia and China).

The Agency for the Prohibition of Nuclear Weapons in Latin America (OPANAL) is the regional agency tasked with monitoring, verification, compliance and wider education on the need for nuclear disarmament whilst the General Conference is its supreme organ.

It is appropriate to see the Treaty, the Additional Protocols I and II and OPANAL as collectively making up the ‘Tlatelolco System,’  a dynamic and evolving architecture influenced by OPANAL’s continuing engagement and initiatives.

Impact
The Treaty of Tlatelolco was the first to successfully implement a fully-fledged, legally binding, nuclear-weapon-free zone policy seeking to ensure the absence of nuclear weapons from the whole of Latin America.

The Tlatelolco Treaty has successfully reduced the risk of nuclear weapon proliferation within Latin America and the risk of becoming a target in a nuclear conflict involving external powers. Not only has it successfully secured legally binding undertakings from all regional states not to acquire or develop nuclear weapons, it has also created verification and monitoring frameworks, as well as regional forums, that have generated trust and cooperation in regional disarmament efforts. It  also contributed to the reversal of military control of nuclear energy programs in Argentina and Brazil – two Latin American countries with the most developed nuclear industries.

The Tlatelolco Treaty played, and continues to play, a critical role in the development of regional non-proliferation norms. Its multilateral framework was a catalyst for Argentine-Brazilian nuclear rapprochement while its negotiation, creation and subsequent implementation has played a key role in the emergence of a consensus favouring non-proliferation in the region.

The Latin American region is now one of the most secure in the world from a regional nuclear conflict and most able to deploy its economic capacity and resources for peaceful economic development rather than expending them on unproductive nuclear arms races that only serve to undermine regional security.

The treaty has been particularly successful in gaining legally binding ratification from all 33 countries in the Latin American region. This includes countries, such as Argentina and Brazil, with highly developed nuclear industries, as well as the one country which had hosted nuclear weapons from an external nuclear weapon state, Cuba – the last to accede in 2002.

The Agency for the Prohibition of Nuclear Weapons in Latin America (OPANAL) has furthermore been successful in promoting the Treaty around the world and strengthening cooperation between all states belonging to nuclear-weapon-free zones, e.g. through conferences. There have been three such conferences which have served to promote wider nuclear elimination approaches in both UN and NPT review forums.

Finally, the treaty acts as an example which could encourage similar regional denuclearisation measures and contribute to the impetus for global nuclear weapon elimination. As one of the architects of the Treaty, Mexico’s Nobel-Prize-winning Ambassador Alfonso Garcia Robles, explained: “It provides profitable lessons for all States wishing to contribute to the broadening of the areas of the world from which those terrible instruments of mass destruction that are nuclear weapons would be forever proscribed.”

Tlatelolco was more than a nuclear non-proliferation initiative or a regional NPT. The assertion of regional commonality against non-regional interference was a central motivating factor of Tlatelolco, and continues to give the agreement particular importance to the parties. It contained a unique waiver mechanism (Article 28) that enabled the gradual take-up of regional non-proliferation norms in a context where there are some initially hesitant states. This allowed states to bring the treaty into force for their own territories ahead of the wider objective of having the treaty in force for the whole of Latin America by waiving certain provisions and to allow the treaty to enter into force for their territory only.

Potential as a Transferable Model
The significance of the Tlatelolco Treaty as a legal precedent, an example of multilateral cooperation and inspiration to other regions, is indicated by the fact that 91 UN member states, almost half of the whole UN, have now ratified legally binding regional nuclear-weapon-free-zone treaties, based on varying degrees  on the Tlateloco model. The entire Southern Hemisphere is now denuclearized.

Regions currently covered by nuclear-weapon-free zones, in addition to Latin America and the Caribbean, are the South Pacific, South-East Asia, Africa and Central Asia. In addition, Mongolia has established itself as a single-state NWFZ.

Each NWFZ Treaty is different and has elements with potential for transferability. Although the Treaty of Tlatelolco has limitations and shortcomings – e.g. it doesn’t prohibit the dispersal of nuclear waste in the zone and it leaves some room for ambiguity with regard to “peaceful nuclear explosives” – the influence of the precedent-setting nature of the first nuclear-weapon-free zone in a populated area is self-evident. Its most fundamental aspects have served as a model for and have been replicated in other NWFZ treaties.

Some of the elements with the potential for transferability include: 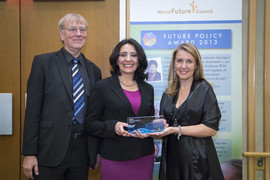 Gioconda Úbeda Rivera, former Secretary-General of the Agency for the Prohibition of Nuclear Weapons in Latin America and the Caribbean (OPANAL) and Deputy Minister of Foreign Affairs of Costa Rica receiving the Future Policy Gold Award.