The Right to Equal Access: Recognised by the Zero Project as an ‘Innovative Policy on Accessibility‘ in 2014, Uganda’s Accessibility Standards are an important start in advocating and enforcing an accessible environment for all persons, including persons with disabilities.

In 2007, a Ugandan ministerial report found that 95% of the buildings in Kampala were not accessible, despite the fact that several laws emphasised the need to have an accessible physical environment, such as the Persons with Disabilities Act and National Policy on Disability, both of 2006. In many countries in the Global South, accessibility standards do not exist. In the few countries where they exist, they are often not legally binding, not enforced and not monitored.Uganda is among the first sub-Saharan countries to have developed their own accessibility standards, with the objective  of them acting as a blueprint and be a tool for measurement, assessment and advising.

After an in-depth review, in 2010, the Uganda National Action on Physical Disability and the Ministry of Gender, Labour and Social Development developed Uganda’s first Accessibility Standards.

Uganda National Action on Physical Disability and Ministry of Gender, Labour and Social Development, Accessibility Standards: A practical guide to create a barrier-free physical environment in Uganda, 2010. [In English]

Uganda is among the first of the sub-Saharan countries to have developed such standards, with few countries in the Global South having enacted legally-binding, enforced and monitored accessibility standards. They constitute an important start to advocating and enforcing an accessible environment. Their objective is to draw up a blueprint and be a tool for measurement, assessment and advising. The Ministry of Education and Sports initially adopted them for all school construction projects and then later, in 2013, the Standards became a requirement for the approval of all construction projects under the national Building Control Act.

In 2007, the Building and Construction Inspection Report of the Ugandan Ministry of Works, Transport and Communication found that 95% of the buildings in Kampala, Mpigi and Wakiso were not accessible. This is in spite of the fact that several laws emphasised the need to have an accessible physical environment, such as the Persons with Disabilities Act and National Policy on Disability (both of 2006).

One of the reasons given for the limited implementation of these laws was the absence of standards. For this reason, after an in-depth review of literature, the Uganda National Action on Physical Disability (UNAPD) and the Ministry of Gender, Labour and Social Development developed the Accessibility Standards, with the support of Dansk Handicap Forbund and in consultation with other stakeholders, including disabled people’s organisations, architects, physical planners, building engineers and community development workers, different government ministries and departments.

The Accessibility Standards aim to improve equal access for all people and to enable those with disabilities to “live independently and participate fully in all aspects of life”. The objective is to draw up a blueprint and a tool for measurement and auditing, in order to promote and enforce an accessible environment.

In order to ensure comprehensive implementation, the Standards contain the guiding principle of a fully accessible trip chain: persons with disabilities must be able to exit the home, access a sidewalk, enter a vehicle, alight from the vehicle onto a sidewalk near the workplace, reach the entrance of the building, manoeuvre within the building and reach their workstation.

In addition, the Standards require implementation that takes the different access barriers into account that wheelchair users, persons with visual and hearing impairments, with intellectual disabilities, and other groups (elderly etc.) encounter.

While the Standards cover mainly the built environment and are to be applied during the design, construction and alteration of buildings and facilities, they also include provisions for the accessibility to services, information and communication (e.g. on public operated machines) and on the use of accessible formats (such as sign language, tactile and braille). They provide detailed plans and maps for:

To promote and enforce compliance, a National Accessibility Audit Committee was set up, composed of professionals of the built environment, ministerial staff, and disability experts from different organisations (in total 8 members).  In addition, District Auditing Committees have been set up. Teams of at least two professionals in disability and accessibility carry out audits, with the help of checklists, to review the compliance of the built environment with the help of its guidelines. Such teams write a report containing an analysis of the state of accessibility, and carry out periodic monitoring.

Persons with disabilities in Uganda are well-organised and have their own representatives at every level of government. With the Standards they can raise awareness, familiarise key stakeholders such as ministry representatives and policy-makers with the concept of accessibility, instruct architects, engineers and contractors about accessible construction, and undertake the necessary audits and advocacy campaigns.

Within a short time of their launch, the Ministry of Education mandated the use of the Standards for all school construction projects funded at the national level and Education Departments at district level started to inspect schools on their accessibility. In what can be deemed a considerable success, the inclusion of the Accessibility Standards in the Building Control Act of 2013, makes them compulsory for all construction projects.

The Accessibility Standards are increasingly being used by contractors, builders, engineers, architects during the planning and construction of facilities, and by government line ministries and departments, DPOs and CSOs in the creation of accessible environments. Various stakeholders have been trained on accessibility as well as accessibility auditing which is conducted to assess whether a facility conforms to the Standards.

With Uganda setting a precedent in the Global South, other countries have taken note and there has been declared interest in replicating Uganda’s experience from Ghana. Currently, the Ghana Standards Authority (GSA) is in the process of defining accessibility standards of public buildings and walkways. If implemented, Ghana will follow Uganda’s lead in taking affirmative action and this legislation can serve as a clear, viable and workable model for wider implementation by states, both in the region and across the world. 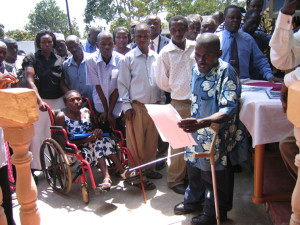 "We call upon all stakeholders in the construction industry to play their part in making Uganda a barrier-free society by implementing these standards.”