Actions to be outlawed which could cause widespread, long-term and irreversible damage to the natural or human environment, including the conditions for the survival of an entire species, sub-species or ecosystem, or those which could gravely or irreparably imperil the health, means of survival or safety of a given human population.

Throughout the world, actions that lead us closer to irreversible tipping-points and worsen our planetary crises are occurring without legal condemnation which adequately reflects the harm caused to future generations. These acts or conduct, known as ‘crimes against future generations,’ can be either political, military, economic, cultural or scientific in nature but are those specifically defined as:

– causing widespread, long-term and severe damage to the natural environment;

– gravely or irreparably imperiling the health, means of survival or safety of a given human population; or

– gravely or irreparably imperiling the conditions of survival of a given species population or ecosystem.

When individuals choose to act in such a way, despite knowing the severe consequences of their acts or conduct on the long-term health, safety, or means of survival of human populations, they must be recognised as committing a crime against future generations.

Examples of Crimes against Future Generations

The varied examples of crimes listed below emphasise the need for interconnected policy solutions in ending their associated impunity:

The search for justice after the occurrence of these crimes is interconnected by nature to other policy solutions. Future-just policies which achieve nuclear disarmament, restore the health of our oceans and reverse deforestation, among others, all work in parallel in the aim of ensuring adequate legal representation for future generations in our justice systems. 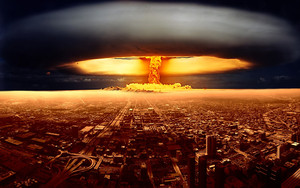 There rests a legal obligation on nuclear-armed States to eliminate their arsenals, as derived from the 1968 Nuclear Non-Proliferation Treaty and customary international law. In its 1996 Advisory Opinion, the ICJ unanimously proclaimed that “there exists an obligation to pursue in good faith and bring to a conclusion negotiations leadings to nuclear disarmament in all its aspects under strict and effective international control.” However, the nuclear-armed States have failed to implement their nuclear disarmament obligations and remain in violation of international law.